The High Court has ordered that three water charge protesters be committed to prison for 28 days each for breaching an order of the High Court.

However, Mr Justice Paul Gilligan suspended the prison terms for six months on condition that they abide by the order.

The company installing water meters, GMC Sierra, claimed four men breached a court order in north Dublin, preventing them from coming within 20 metres of its work stations and from interfering with the entrance and exit of the company's vehicles.

The company's application against one man was struck out after the court found he had not been properly served with the necessary legal documentation to attach and commit him.

But he said none of the three defendants had denied that they had breached the order preventing them from coming within 20 metres of the works.

He said he was satisfied beyond reasonable doubt that they had breached the order he made earlier this month.

Mr Justice Gilligan said establishing and maintaining the rule of law was a fundamental imperative of the foundation of a democratic society.

He said it was imperative that decisions made by the courts were abided by.

If orders of the court were breached or ignored in any way, it undermined the very fabric upon which the democratic society is built, to the detriment of its citizens.

Mr Justice Gilligan said the authority of the court must be respected.

He said a prison sentence for contempt of court must be a last resort and must be imposed with manifest caution and with great reluctance.

But he said the courts could not stand idly by while those who defied its orders went free and those who seek its protection lose out. 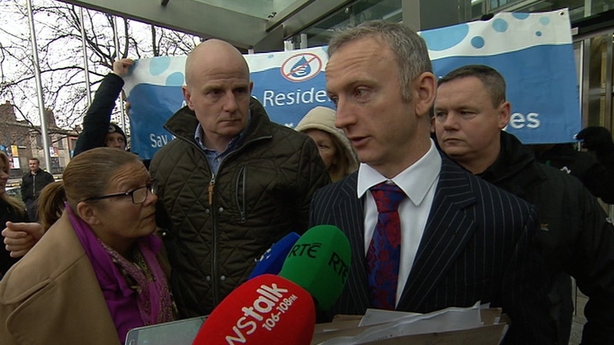 Mr Justice Gilligan said the three men did not seem to appreciate the potential gravity of the situation.

He added their overall approach that they had done nothing wrong and the acts they were engaged in were all lawful, was difficult to comprehend and constituted a serious affront to the court and its order.

He said the breaches of the order may not in themselves be considered very serious.

Mr Justice Gilligan also said he had given some thought to the appropriate penalty to impose.

There were shouts of "shame on you" as the judge announced he intended to commit each of them to 28 days in prison, but little other reaction after he announced he was suspending the sentences for six months.

Outside the court, protesters said they would continue to protest against the installation of water meters.

Solicitor for the three men, Cahir O'Higgins, said his clients would protest lawfully and respectfully.

Costs of the application to have the men jailed or fined were awarded against the three men.