The death toll from the attack on a synagogue in Jerusalem has risen to five after a policeman died from his injuries.

Zidan Saief, 30, died after suffering severe injuries when two Palestinians armed with a gun and meat cleavers burst into the synagogue and killed four Israelis before being shot dead.

The four Israelis had dual nationality, with three from the US and one from Britain. 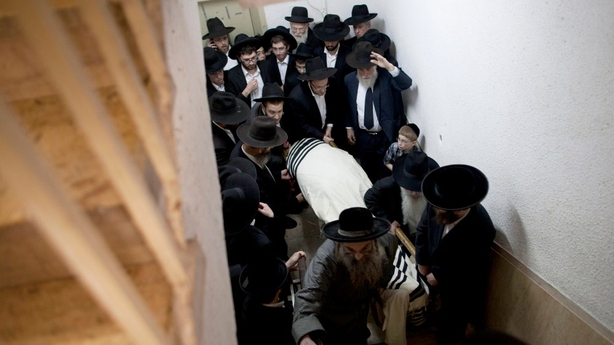 A spokeswoman for the US State Department said: "We can confirm that three US citizens, Mosheh Twersky, Aryeh Kupinsky and Cary William Levine were killed in the attack on a synagogue in Jerusalem."

A spokesman for the British Foreign Office in London said it was aware of the British national's death.

Rabbi Avraham Shmuel Goldberg was a married father of six with several grandchildren and great-children according to relatives.

He was born and brought up in Liverpool and worked in London before moving to live in Israel with his family.

Israeli police said two men, armed with a gun and an axe, entered the synagogue and attacked worshippers this morning.

"We are viewing this as a terrorist attack," police spokesman Micky Rosenfeld said.

The Popular Front for the Liberation of Palestine, said it carried out the attack, which it called a "heroic operation".

A worshipper at the service in the Kehillat Bnei Torah synagogue said 25 people were praying when shooting broke out.

Violence in Israel and the Palestinian Territories has surged over the past few weeks. 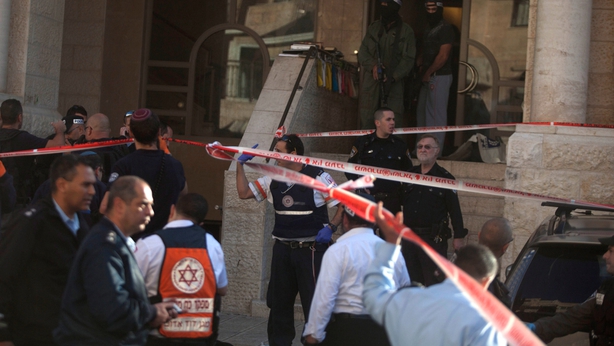 Five Israelis and a foreign visitor have been deliberately run over and killed or stabbed to death by Palestinians in the past month.

About a dozen Palestinians have been killed, including those accused of carrying out those attacks.

Residents trace the violence in Jerusalem back to July, when a Palestinian teenager was burned to death by Jewish assailants, an alleged revenge attack for the abduction and killing of three Jewish teens by Palestinian militants in the occupied West Bank.

The summer war in Gaza and a row over access to a Jerusalem compound sacred to Muslims and Jews alike have also been triggers for violence.

"This is the direct result of incitement by Hamas and Abu Mazen [Abbas], incitement that the international community ignores in an irresponsible manner," Mr Netanyahu said in a statement.

However, Mr Abbas said: "The presidency condemns the attack on Jewish worshippers in one of their places of prayer in West Jerusalem and condemns the killing of civilians no matter who is doing it."

British Prime Minister David Cameron said he was "appalled" by the incident, writing on Twitter that his "thoughts are with the victims' families".

US Secretary of State John Kerry also condemned the attack, saying it was an "act of pure terror and senseless brutality".

She said: "The attack in the Har Nof synagogue this morning killing at least four people can only harm any step forward towards peace.

"It is an act of terror against worshippers at morning prayers and is condemnable by all means."

She warned against the risk of a cycle of violence if all sides did not try to ease the tension.

Israel is to ease controls on carrying weapons for self-defence in the wake of the synagogue attack, Public Security Minister Yitzhak Aharonovitch said this morning.

"In the coming hours, I will ease restrictions on carrying weapons," he said in remarks broadcast on public radio.

He indicated it would apply to anyone with a licence to carry a gun, such as private security guards and off-duty army officers.

Elswhere, Spanish politicians have urged their government to recognise Palestine as a state, albeit only when the Palestinians and Israel negotiate a solution to their long-running conflict.

The symbolic motion received the backing of all the political groups of the lower house.