The European Central Bank has published four letters relating to contacts between the ECB and the government in the run-up to the bailout in November 2010.

The ECB said it wanted to show that a single letter did not push Ireland into the programme, as has been sometimes claimed.

It argued that it was the scale of the domestic crisis that made it necessary for Ireland to seek a bailout.

In a statement, the ECB stated: "Documentation shows domestic factors pushed Ireland towards [the bailout] programme."

The ECB has also published material such as speeches covering the months leading into the formal application for a bailout.

It noted that during this time, the ECB continued to support the Irish banks with multibillion euro loans and helped to prop up the Irish economy in what it called an unprecedented fashion.

The letters were sent by former ECB president Jean-Claude Trichet and late finance minister Brian Lenihan between October and November 2010 at the time of Ireland's European Union-International Monetary Fund bailout.

The publication includes the letter sent by Mr Trichet to Mr Lenihan on 19 November 2010.

In that letter, the ECB threatened to cut off emergency funding to the Irish banking sector unless the government agreed to a bailout.

The letter was leaked to the Irish Times, which published it this morning.

The letter stated that the governing council of the bank could only authorise further liquidity funding to Irish banks if it received a commitment in writing from the government that it would send a request for financial support to the Eurogroup.

It also stated that the government had to commit to undertake actions on budget cutbacks and financial sector restructuring.

That restructuring plan had to include the provision of necessary capital to the Irish banking system and the government had to agree to underwrite the repayment of the liquidity funding to the Central Bank.

The letter was sent the day after Central Bank Governor Patrick Honohan said on RTÉ's Morning Ireland that Ireland had no option but to apply for a bailout.

In the period after the bailout was agreed, Mr Lenihan was on record as referring to a veiled threat by the ECB to cut off funding to Irish banks if the government did not agree to apply for a bailout.

The ECB was approached by EU Ombudsman Emily O'Reilly and Fine Gael MEP Sean Kelly to have the 19 November letter published.

The ECB said today that it "honoured the European Ombudsman’s call for the Governing Council to re-consider the release of the letter".

The ECB had said it would not do so before the recent round of bank stress tests was published.

A letter dated 15 October 2010 from Mr Trichet to Mr Lenihan indicated an early warning to the government that the ECB was looking seriously at the kind of collateral offered by Irish banks when seeking emergency liquidity assistance.

Mr Trichet warned that the ECB could impose conditions if the emergency funding were to continue.

The letter, marked confidential, noted that there had been an "extraordinarily large provision of liquidity by the Eurosystem to Irish banks in recent weeks".

Mr Trichet wrote that the ECB would carefully monitor the level of emergency funding and the financial soundness of Irish banks in order to ensure that it did not amount to illegal monetary financing.

The letter outlined the concern the ECB had over the amount of emergency funding being provided to the soon-to-be-bankrupt Anglo Irish Bank.

Mr Trichet noted that the collateral being used by Irish banks was the sovereign itself, since the State had begun to take ownership of the banks. 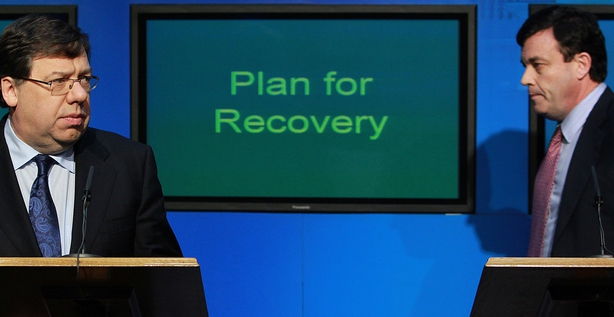 Any decisions to continue emergency funding would depend on the then Fianna Fáil-led coalition sticking to a four-year economic plan that it was due to announce two weeks later.

In general, the government would have to carry out its promised fiscal consolidation, structural reforms and a repair of the financial sector.

However, there was no explicit threat at this point that funding would be cut off unless Ireland entered a bailout.

The letter from Mr Lenihan to Mr Trichet on 4 November 2010 reveals the extent of the government's panic regarding the ever-widening bond spreads affecting the State.

Mr Lenihan blamed comment by unnamed EU leaders and commentators for the sharp increase in the State's borrowing costs.

He said such comments were undermining the government's efforts to get to grips with the economic collapse.

In particular, Mr Lenihan said that bond spreads had risen sharply because of comments by "senior political figures" over what conditions might apply to countries accessing the nascent EU bailout fund, the European Financial Stability Facility (EFSF).

This is taken to refer to a Franco-German summit at Deauville in France, during which Chancellor Angela Merkel and the then French president Nicolas Sarkozy declared that private creditors would have to take a hit if eurozone countries had recourse to the EFSF.

Mr Lenihan said the comments had pushed bond spreads even higher and he appealed to Mr Trichet to use his influence to help "calm the markets".

In the letter dated 21 November, Mr Lenihan asked Mr Trichet for "external support" from the European and international support mechanisms.

Mr Lenihan said the "grave and serious decision" had been taken in light of a number of developments.

These included the Greek debt crisis, the slowdown in the pace of economic recovery nationally and the increasing concern regarding the speed of recovery in the international economy.

He explained to Mr Trichet that the credit rating actions and negative market sentiment had exacerbated the situation.

Mr Lenihan outlined in the letter that all of these events had led to a "crisis in confidence" in both the Irish banking system and increasingly the Irish sovereign.

The minister ended the letter telling Mr Trichet that "we here will not be lacking in the will to do all that is necessary on our part to protect our economy and to play our role in the Eurosystem".

Taoiseach Enda Kenny has said the 19 November letter from Mr Trichet was a reminder "of what we can never let happen to the Irish economy again, we must never roll back to that disaster area again".

He said the die for that letter had been cast as far back as the 1997 election.

Mr Kenny said a Fianna Fáil-led coalition had allowed drift in the economy and had not recognised the difficulties that existed.

He said the economy had not been managed effectively at this time, and the letters came after the Central Bank Governor had spoken on radio of the need for a bailout programme.

Tánaiste Joan Burton said it was an inevitable result of that government's decision to issue the blanket bank guarantee.

Minister for Finance Michael Noonan has described the letter from the ECB as "the key letter" in the four-letter sequence.

Speaking as he arrived at Government Buildings this morning, Mr Noonan said he reviewed the correspondence last night having not read it for three years.

Mr Noonan said it was a "vital piece of information" for the banking inquiry.

Asked if Ireland had been bullied, he said this was something the inquiry would reach a conclusion on, before adding: "I think the letters speak for themselves."

Minister for Public Expenditure and Reform  Brendan Howlin said the letters would come as a shock to people.

He said: "The content I heard on Morning Ireland this morning will come as a shock to many people, and certainly on our interactions with the ECB on coming into Government, we understand the sorts of demands and pressures that they put us under at that time."

Mr McGrath said: "I believe the correspondence ... clearly shows that the ECB strayed into areas of policy which should have been reserved for the democratically elected Government of the State and the EU Commission."

Independent TD Catherine Murphy raised the matter in the Dáil, saying the release of the letters was designed "knock Irish Water out of the headlines".

Independent TD Shane Ross said the show that the ECB "absolutely shamefully" and that the former finance minister was "up a gum tree".

Speaking on RTÉ's News at One, he said the previous government had "buckled under" and that "Ireland was humiliated, bullied, picked on first and treated very badly".

The Chairman of the Oireachtas Banking Inquiry has said the publication of the letters will add to what needs to be asked and answered at the banking inquiry.

Ciarán Lynch told RTÉ’s News at One that the correspondence will help the inquiry raise a series of questions that it should now be examining.

He said it must be bourne in mind that these letters came two years after the Bank Guarantee was put in place in September 2008.

Fianna Fáil has accused the ECB of bullying a sovereign nation in the correspondence released today and has said the body must now appear before the proposed banking inquiry.

He told reporters at Leinster House that the behaviour of the bank was threatening and overstepped the mark.

Mr McGrath said the authorities in Europe believed at the time that the financial crisis could be contained in Ireland and that proved to be a very big mistake.

He said Ireland was clearly heading in the direction of a bailout – but he said that was because of a situation engineered and orchestrated by France and Germany.

Mr McGrath said he was disappointed that the Government was using the publication of the correspondence to bash Fianna Fáil, rather than as leverage in the negotiations over the very big issues that remained outstanding. 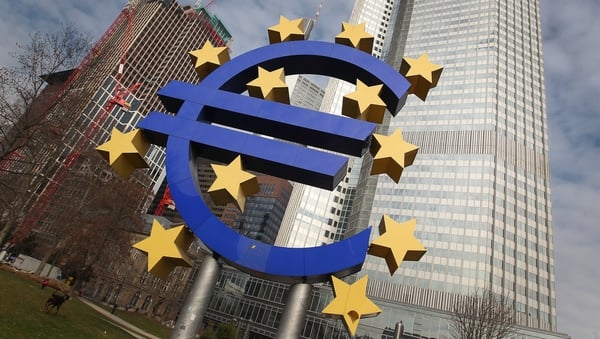 ECB may release Lenihan letter sent on eve of bailout