A new study from UNICEF on the impact of the recession on children in 41 developed countries places Ireland close to the bottom of the list.

The report has ranked Ireland in 37th place in the league table measuring relative changes in child poverty.

Only Croatia, Latvia, Greece and Iceland finished below Ireland in the UNICEF league table.

The report looked at the impact of the economic crisis on child well-being.

It found Irish families with children have lost the equivalent of ten years of income progress.

This corresponds to a net increase of more than 130,000 poor children in Ireland.

Comparatively, poverty among older people has increased by 2.5% during the same period.

Of the 41 countries surveyed, 18 recorded a reduction in child poverty, including Chile, Australia and Poland.

UNICEF said the data showed a strong correlation between the impact of the financial crisis and a disproportionate decline in children's well-being.

UNICEF Ireland Executive Director Peter Power said: "Countries should place the well-being of children at the top of their priorities during economic recessions.

"Not only is this a moral obligation, but it is in the long term self-interest of societies.

"Children living in poverty are more likely to become impoverished adults and have poor children, creating and sustaining intergenerational cycles of poverty."

Speaking on RTÉ's Morning Ireland, Mr Power outlined the long-term problems if the issue of child poverty is not addressed and what the Government needs to do.

He said: "We need to look at this whole problem from a child's rights perspective. Children have a right to grow up outside of endemic poverty.

"One very important recommendation that we would ask Government to look at and that's this - that they set out certain red lines and if poverty indicators fall below those red lines that it automatically triggers an intervention by Government." 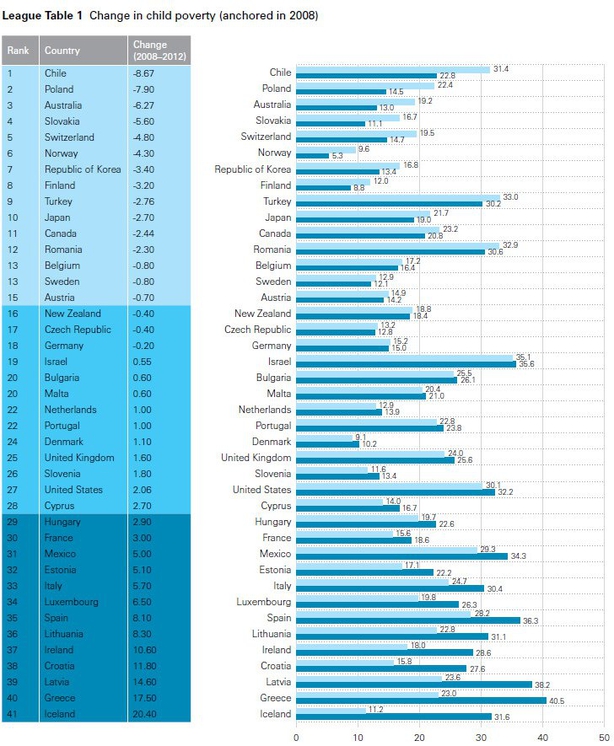