Iraqi peshmerga fighters have left Iraq for the besieged Syrian town of Kobane to help fellow Kurds in their battle against Islamic State militants, according to a senior Kurdish official.

Hemin Hawrami, a senior Kurdish official, wrote on Twitter that peshmerga fighters were flying from Arbil airport to Turkey, from where they would travel by land to Kobane.

US warplanes have been bombing Islamic State positions near Kobane for weeks, but Turkish Prime Minister Ahmet Davutoglu has said air strikes alone would not be enough to repel the insurgents.

Turkey has been reluctant to join the US-led coalition against IS, an al-Qaeda offshoot.

However after pressure from its Western allies, President Tayyip Erdogan said last Wednesday that some peshmerga fighters from Iraq would be allowed to transit through Turkey to Kobane.

The town has been encircled by IS fighters for more than a month and the battle to save it has become a test of the US-led coalition's strategy for halting the radical Sunni Muslim group's advance.

The Iraqi Kurdish region's parliament voted last week to deploy some peshmerga to Syria although a Kurdish government spokesman later said they would not engage in direct combat in Kobane but provide artillery support.

IS has also released a video showing a British hostage apparently in Kobane, in an attempt to disprove that it was losing the battle for the disputed Syrian border town.

The video, the latest in a series featuring 43-year-old kidnapped reporter John Cantlie, shows him in a war-damaged town, talking to the camera and rejecting US claims that the "mujahedeen" are in retreat.

There is no indication in the video of when it was shot, but Mr Cantlie refers to a news report that was broadcast by the BBC on 17 October and to remarks made by a US military spokesman on 16 October.

Views of Kobane in the video include shots of a row of grain silos topped by a Turkish flag that correspond to some shown in maps of the area on the other side of the frontier.

Aerial footage of the town, which the self-proclaimed IS group has stamped as having been shot by a "Drone of the Islamic State Army," shows a wrecked city whose street layout corresponds to that of pre-war satellite maps of Kobane.

Mr Cantlie dismisses reports that IS forces have failed in their assault on the Kurdish town, declaring that they hold the east and south of Kobane and that their victory there is only a matter of time.

Since 17 October, the earliest date the video could have been made, fighting has continued in Kobane, which Kurdish fighters backed by US and Arab air strikes are defending against the militants.

US Central Command reported that air strikes by warplanes of the US-led coalition fighting IS had destroyed IS vehicles and an "occupied building" in the town.

In their latest statements on the battle, US officials said their strikes have "slowed IS advances" but that the situation is fluid.

US forces staged four airstrikes on ISe militants in Syria today, with allies taking part in nine strikes on the group in Iraq , US Central Command said.

In Syria, US attack and fighter aircraft carried out strikes on targets near Kobane, destroying a small IS unit and four fighting positions.

In Iraq US and allied attack, fighter and remotely controlled aircraft again targeted the Mosul Dam area with four strikes taking out a small fighting unit, a fighting position, vehicle and logistics base.

Two strikes near Fallujah destroyed a small IS unit and tank.

Other strikes were staged west of Baghdad, near Sinjar and northwest of Haditha.

Mr Cantlie was kidnapped in Syria in November 2012 while covering the civil war there.

Four hostages, two US citizens and two Britons, have been murdered by IS militants.

Mr Cantlie has appeared in a series of propaganda videos apparently designed to influence media coverage of the war and to counter US and British claims.

Previous footage has shown him behind a desk addressing a fixed camera, admitting that he is a hostage and could be killed by IS at any time. 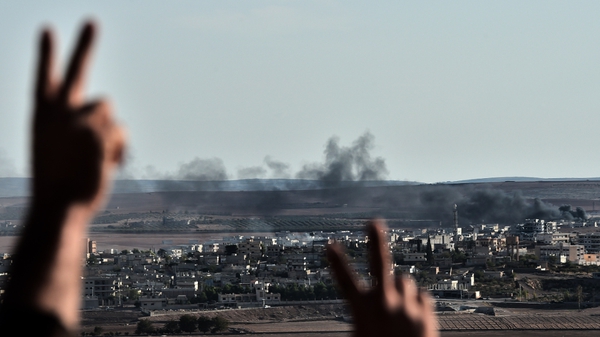