Fighters from the Islamic State group have seized control of three districts in the Syrian town of Kobane, according to a British-based monitoring group.

The Syrian Observatory for Human Rights is reporting that IS fighters seized three districts in the eastern part of the town, which is near the Turkish border, following violent clashes with Kurdish forces.

Earlier, IS raised its flag on a building on the eastern side of Kobane in Syria.

IS fighters have been battling Kurdish forces for control of the Syrian border town for almost three weeks.

A black flag apparently belonging to the group was visible atop a four-storey building close to the scene of some of the most intense clashes in recent days, Reuters television images shot from neighbouring Turkey showed.

A Turkish military officer who did not give his name said the flag was that of Islamic State, which has seized swathes of territory in Syria and Iraq in recent months.

Kurdish fighters who are defending the town say IS forces have not reached the town centre yet.

Up to 20 militants were killed in the fighting around the town last night.

It was not immediately clear whether the planes were Iraqi or from the US-led international coalition, which carries out daily raids against IS targets in Iraq and Syria.

Meanwhile, at least 30 Kurdish fighters have been killed in two suicide attacks in the city of Hasakah in northeastern Syria.

The new head of NATO has said the group would protect member Turkey against attacks from IS, as the group continues to capture territory on the Turkish-Syrian border.

"Turkey is a NATO ally and our main responsibility is to protect the integrity, the borders of Turkey," NATO Secretary General Jens Stoltenberg told reporters.

"We have deployed Patriot missiles in Turkey, to enhance, to strengthen the air defence of Turkey. And Turkey should know that NATO will be there if there is any spillover, any attacks on Turkey as a consequence of the violence we see in Syria." 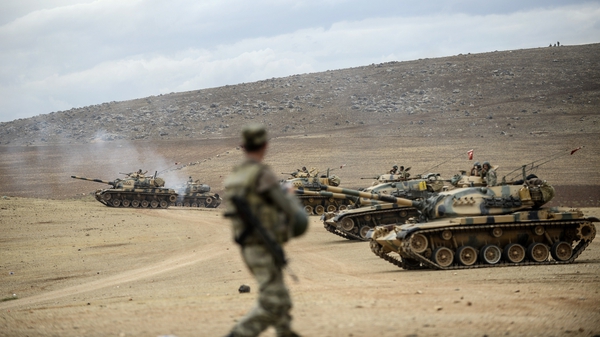 Turkey vows to resist IS takeover of Kobane