The chairperson of the Fine Gael Women's Group has accused the party of total hypocrisy over the treatment of women, according to a letter of resignation seen by RTÉ's This Week.

Galway businesswoman Frances Cahill personally wrote to Taoiseach Enda Kenny and Fine Gael General Secretary Tom Curran, in which she informed them of her resignation from both the Fine Gael Women's Group and the governing National Executive.

According to emails sent on 18 August 2012, and seen by RTÉ, Ms Cahill expressed concern over the treatment of the women's group within the party structure prior to her resignation.

A party spokesperson has confirmed that the Fine Gael Women's Group has been placed "on hold" and replaced by a consultant group called Equality Strategies.

Informing him of her decision to resign, Ms Cahill expressed her concerns directly to the Taoiseach in strongly-worded correspondence.

"I feel that there is a huge level of hypocrisy (sic) within the organisation, especially with gender equality.

"Here we are trying to promote more females into the party and our own women's group is treated like second class citizens, which I think is a disgrace.

"I became chair in 2008, and maybe came into this with rose tinted glasses, thinking I could help make a change for female members of the party and bring fresh ideas and young people. Well how stupid was I," she wrote.

She told Mr Kenny she was concerned that the Fine Gael Women's Group "were to be seen and not heard especially at executive level".

She said that attempts to reform and modernise the women's group, which she had favoured, were resisted by "old-school" party members.

In the email, she called on Mr Kenny to make positive changes within the party to suit female members.

"I am glad I got the opportunity to work with Fine Gael during the successful years and wish you all the best.

"But please, for the sake of all females out there trying to prove themselves in society, and especially in the workplace, let them see that Fine Gael can be the party for women".

It is understood that Ms Cahill has not received any reply from either the Taoiseach or Mr Curran in relation to her concerns, since she wrote to them both.

A spokesperson for Fine Gael said that following the last General Election it was decided to bring in a consultant group to work on the issue of gender equality in Fine Gael and to change the culture of the organisation.

"At that time a Women's Group was in existence in the party and all members of this group were invited to attend meetings with the new consultant group, Equality Strategies. Over the course of their meetings, they discussed the best strategy for increasing the participation of women at all levels in the party," the spokesperson said.

"Members of the Women's Group decided that a new approach was needed.

"They felt that having a separate Women's Group did not serve their purpose in terms of achieving gender equality within the party.

"It was agreed to put the group on hold and to work with Equality Strategies to develop a more integrated strategy to build gender equality into all aspects of the party's work.

"The Chair of the Fine Gael Women's Group disagreed with the new approach and resigned her position," the spokesperson said.

Meanwhile, it has emerged that some attempts have been made to boycott the upcoming annual Fine Gael Ladies' Lunch, according to a number of female party members who spoke to RTÉ News.

It is not clear how widespread or well-organised the bid is, which is aimed at causing embarrassment to party management following the Taoiseach's decision to propose John McNulty as a candidate in the upcoming Seanad by-election to replace Deirdre Clune.

A Fine Gael spokesperson told RTÉ News that there was "absolutely no evidence of any boycott of the Ladies' Lunch".

"This very successful annual event on the Fine Gael calendar is taking place again this year and is as well supported as ever".

However, Fine Gael Councillor for South Dublin Anne-Marie Dermody confirmed to RTÉ's This Week that she was aware of some bid to boycott the Ladies' Lunch, which is hosted by the Taoiseach's wife Fionnuala Kenny.

She said she would not be supporting any such boycott. 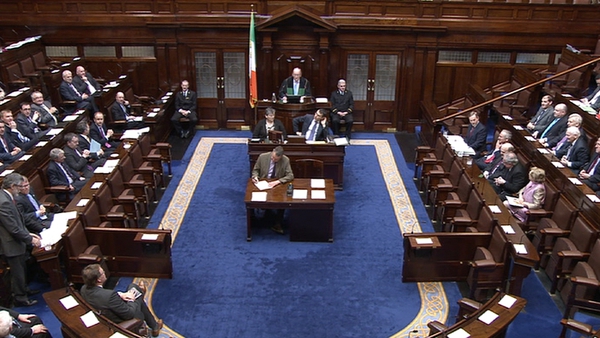