More than 100 suspects have been arrested in Ireland as part of an unprecedented Europol swoop on organised crime across Europe.

Police across the EU arrested more than 1,000 suspects and rescued at least 30 trafficked children.

Gardaí confirmed 106 people were arrested in Ireland for offences such as burglary, theft, counterfeit notes and possession of offensive weapons.

One person was arrested over a sexual offence.

A total of 27 arrests were made over warrants, with one person arrested on foot of a European arrest warrant.

"We designed an operation specifically to hit criminal infrastructure," Mr Wainwright said at Europol's headquarters in The Hague.

"Multiple criminal enterprises, some of them the most serious, have been disrupted right across Europe," he said.

In one of the raids, 30 Romanian children were saved from child traffickers aiming to use the victims as sex slaves or slave labour.

The operation targeted organised crime groups and their infrastructures across the European Union in a series of actions in hundreds of locations, with the cooperation of Eurojust, Frontex and Interpol.

Australia, Colombia, Norway, Serbia, Switzerland and the US also took part in the raids. 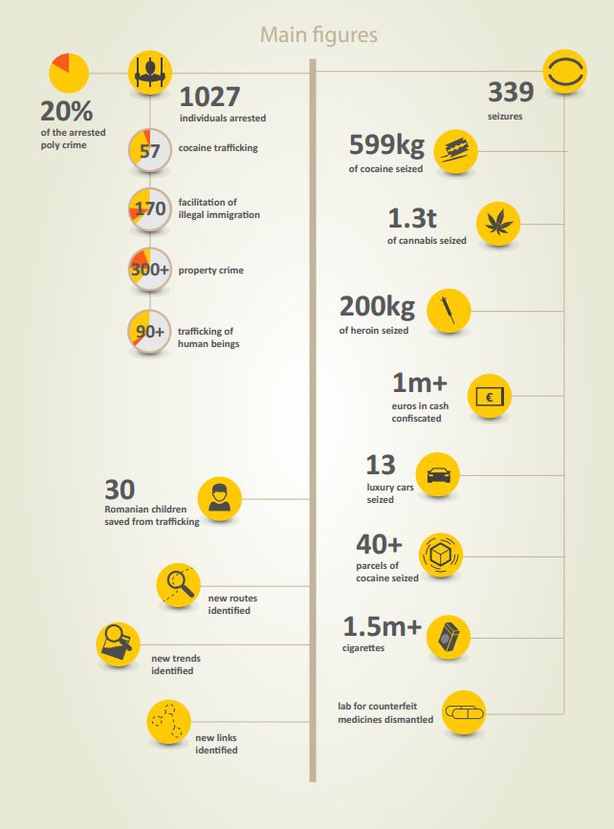