The blockade of the Greyhound Waste Recycling depot in Clondalkin in Dublin has been lifted for one week as part of an agreement aimed at resolving the dispute over pay cuts at the plant.

The decision was taken after striking workers met union representatives this afternoon.

The blockade at the plant in the Clondalkin Industrial Estate has been in place for the past two weeks.

Greyhound has said that normal service has resumed and any outstanding collections will be completed tomorrow.

It is understood that direct talks will take place between the legal teams of the company and striking workers, with the company expected to put forward new proposals.

The lifting of the blockade should facilitate improved bin collections, which had been disrupted by the industrial action.

The first recycling trucks arrived at the depot earlier this evening.

Spokesperson for the workers Ray Reilly said the official picket would continue.

Earlier, the case at the High Court was adjourned for a week to allow for talks between the two sides.

Counsel for Greyhound Louis McEntagart asked the court to adjourn the motion for one week by agreement between the parties.

He said  detailed discussions will take place during that week aimed at resolving the issues.

He said the engagement between the two sides today had been constructive.

Counsel for SIPTU and 53 of the striking workers William Hamilton confirmed the adjournment was agreed by both sides.

Ms Justice Bronagh O'Hanlon thanked both sides for dealing with the matter in such a constructive way.

She said she appreciated the situation was difficult for all concerned and wished them all the best for a positive resolution.

Around 50 of the non-striking workers who face losing their jobs as a result of the 13-week strike by 78 operatives protested against the strikers.

They say they fear losing their jobs after the company warned that 400 jobs are at risk as a result of what it describes as a blockade of trucks at the Dublin plant.

The workers were escorted back on their bus by gardaí after they were heckled by protesters supporting the strike.

The demonstrators supporting the striking workers walked past the smaller group of protesters shouting "scabs out."

Both groups of protesters later dispersed.

Leaving the High Court this afternoon, spokesperson for the striking workers Ray Reilly said the court case had been adjourned for one week while negotiations are going on.

Greyhound Recycling owner Michael Buckley yesterday said he was disappointed that workers had rejected what he called the best offer the company could make.

The workers rejected by a significant majority the new pay proposals, which were aimed at ending the three-month dispute.

Mr Buckley confirmed Greyhound would now be going to the High Court to seek enforcement of injunctions that were previously granted to the company to prevent illegal activity by some on the picket line.

He said it would also be seeking damages from anyone involved in any illegality that had affected the company.

However, the workers have described the latest company offer, which still involves pay cuts of around 30%, as derisory.

Some said they were prepared to go to jail if necessary to defend their pay and conditions.

SIPTU, which has so far paid out strike money totalling almost €250,000, stresses that it has not engaged in illegal activity.

Meanwhile, a spokesperson for Greyhound said reports that the Commercial Wing of Greyhound had been sold were not true.

Prior to the strike Greyhound transferred a small number of bag collection streets to key waste.

Up to 50 households were involved.

The routes became uneconomic for Greyhound as the workers were seeking extra shift allowances to complete these routes. 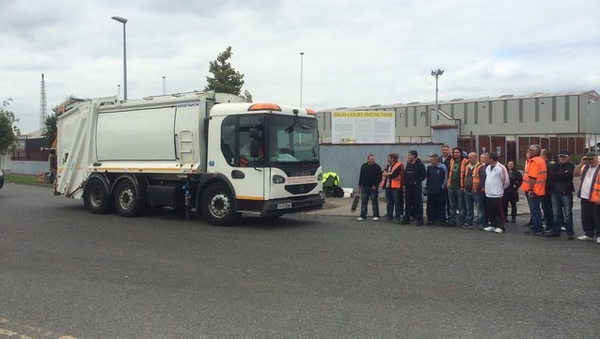