Two people have been injured after a republican parade through Belfast city centre.

Plastic bottles, fireworks and coins were thrown by a small group of protesting loyalists along the main shopping street but the event was largely peaceful.

The Police Service of Northern Ireland said an officer and a member of the public were slightly hurt.

Unionists were objecting to nationalists marking the anniversary of the introduction of detention without trial of terrorism suspects during the height of the Troubles, which is still a republican grievance more than 40 years later.

Dozens of riot police formed a barrier between the opposing groups on Royal Avenue and there were some verbal exchanges.

Metal security force barricades were erected throughout the city centre's side streets.

Heavily armoured police Land Rovers were parked at almost every corner and large white water cannon vehicles and police dogs were on standby for trouble.

At the same event last year 56 officers were injured when loyalist protesters clashed with police.

Marches this summer, the majority by loyal orders, have been almost exclusively peaceful after a broad coalition of unionists appealed for calm.

Mr Adams said he was not hopeful that a fresh round of all-party talks, which the Government wants to see beginning next month, could resolve outstanding issues hanging over from the peace process.

Those include dealing with the legacy of conflict violence and issues over contentious parades and flags.

Northern Ireland First Minister Peter Robinson has said the issue most likely to bring down the executive was failure to agree on welfare reform cuts.

The cuts from  the Treasury threaten to reduce the amount it pays to fund Northern Ireland public services.

In recent days NI ministers have warned street lights may not be repaired.

The expansion of the University of UIster in Derry may be taken off the table as a consequence of the disagreement over welfare.

Changes include the so-called spare bedroom tax, which Sinn Féin argues will hit the poorest hard but which the DUP favours implementing rather than facing large fines from Westminster. 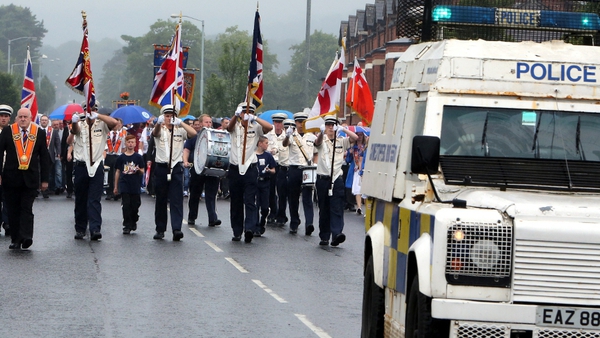