Israeli Prime Minister Benjamin Netanyahu has said he had ordered the military to prepare for a possible significant expansion of the ground operation against Gaza militants.

Mr Netanyahu said air strikes alone could not deal a significant blow to the network of tunnels used by Hamas militants to stage cross-border attacks on southern Israel.

"Last night our forces began a ground operation to hit the terror tunnels crossing from Gaza into Israel's territory," he said.

"It is not possible to deal with the tunnels only from the air [so] our soldiers are doing that also on the ground."

In his remarks, Mr Netanyahu referred to an attempted attack yesterday by 13 Gaza militants who managed to infiltrate southern Israel by tunnel before being spotted by the army.

One of the Gaza militants was killed in an air strike.

The rest retreated into the tunnel, thwarting what Mr Netanyahu said would have been a "mass attack" on Israeli civilians.

Mr Netanyahu said he had only ordered the troops in after several attempts to reach a ceasefire had failed.

"We chose to launch this operation after exhausting the last options," he said.

Meanwhile, the death toll on the 11th day of fighting between Israel and the Palestinian Hamas group stands at 292 people in Gaza.

At least eight members of a single family, among them four children, were killed by Israeli tank fire in northern Gaza this evening.

The eight members of the Abu Jurad family, two men, two women, and four children, were killed in their home in Beit Hanun.

Two Israelis have been killed, one civilian and one soldier.

Israel's toll in the violence has risen to two, with the death of a soldier in Gaza, the army said.

Since the Israeli operation began on 8 July, at least 1,150 rockets fired from Gaza have struck Israel, and another 311 have been shot down by the Iron Dome air defence system, army figures say.

The Israeli ground offensive comes after ten days of bombardments from the air and sea failed to stop militants' rocket attacks.

An Israeli military spokesman said yesterday that Israel was not out to try to topple Hamas.

Hamas spokesman Sami Abu Zuhri responded with defiance to Israel's invasion announcement, telling Reuters: "We warn Netanyahu of the dreadful consequences of such a foolish act."

The UN Security Council is due to meet for an emergency session this evening following the Israeli ground operation.

The meeting was called at the request of Jordan and Turkey.

Elsewhere, the EU has said it is very concerned over the escalation of violence in Gaza and has reiterated its call for an immediate ceasefire.

Minister for Foreign Affairs Charlie Flanagan has said he expressed his concern about the violence in Gaza when he met Israeli Ambassador Boaz Modai today.

Mr Flanagan said: "I have already stated clearly that the violence now being witnessed in Gaza and Israel is unacceptable and that it is incumbent on all sides to agree an immediate ceasefire to spare civilians from further violence and suffering." 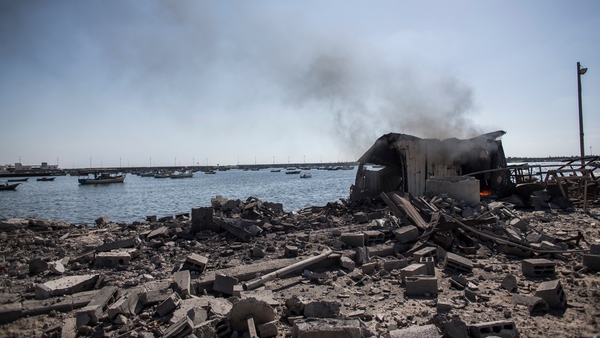