Israeli Prime Minister Benjamin Netanyahu has said a ground offensive is under way in Gaza.

Five people have been reported killed so far, including a five-month-old baby.

"The prime minister and defence minister have instructed the IDF to begin a ground operation tonight in order to hit the terror tunnels from Gaza into Israel," the statement by Mr Netanyahu said.

"A new phase of Operation Protective Edge has begun," it said.

"The new phase follows 10 days of Hamas attacks on Israel by land, air & sea - and repeated rejections of offers to de-escalate the situation."

A spokesman for Hamas said the ground invasion is "foolish" and will have "dreadful consequences".

"Egypt condemns the Israeli escalation in Gaza and calls for self-control as its air strikes and ground operation only aggravate the situation and do not help preserve Israel's security," the foreign ministry said.

Another two youngsters died in a separate attack.

Gaza health officials say at least 246 Palestinians, mostly civilians, and among them over 40 children have been killed so far in the conflict.

The death of five children today comes after four boys, aged between nine and 11, were killed yesterday in an Israeli raid on a beach in Gaza City.

The Israeli army said the killings appeared to be the "tragic outcome" of a strike targeting Hamas militants.

In Israel, one civilian has been killed in the past ten days by one of more than 1,300 Palestinian rockets fired.

Clinton warns Israel about isolating itself

Former US president Bill Clinton has warned Israel about "isolating itself from world opinion" due to repeated conflicts in Gaza.

"Over the long run it is not good for Israel to keep isolating itself from world opinion because of the absence of a viable peace process," Mr Clinton told the Indian NDTV news channel yesterday.

"In the short to medium term, Hamas can inflict terrible public relations damage on Israel by forcing it to kill Palestinian civilians to counter Hamas," he added.

Hamas had a "strategy designed to force Israel to kill their own (Palestinian) civilians so the rest of the world will condemn them," while Israel could not "look like fools" by not responding to the heavy missile attacks.

"I believe that Prime Minister Netanyahu could and should make a comprehensive peace agreement with the Palestinians," he said.

US officials would use their diplomatic resources over the next 24 hours to pursue closing a deal, he added.

Egypt had proposed a permanent ceasefire plan on Tuesday, which Israel accepted and Hamas rejected, saying its terms had been ignored.

Israeli media reports said Egypt was continuing its truce efforts and that senior Israeli officials would hold talks in Cairo today on a ceasefire.

UEFA, European footballs governing body, has announced that no matches in the Champions League or Europa League, Europe's two international club competitions, can be played in Israel.

In a statement UEFA said it had "decided, due to the current security situation in Israel, no UEFA competition matches may be played in the country until further notice."

"Consequently, the Israeli clubs involved in forthcoming fixtures have been requested to propose alternative venues outside of Israel's territory for their home legs in the 2014/15 UEFA Champions League and UEFA Europa League." 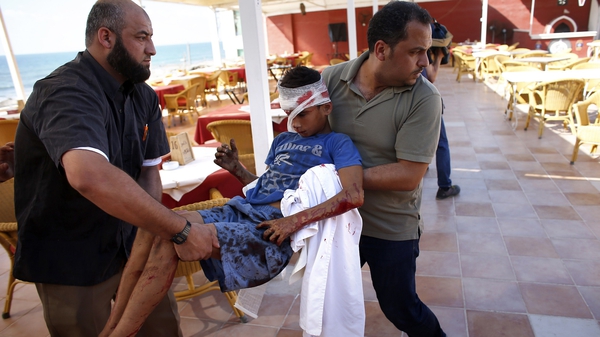