Most Spaniards do not want the government to change abortion laws to make it harder to terminate unwanted pregnancies, according to a poll published in El Pais newspaper this afternoon.

The ruling conservative People's Party (PP) has proposed a law which would make Spain one of the most restrictive countries in Europe with regards to abortion.

Thousands of people in Spain, a traditionally Catholic country, have marched against the proposed changes to existing law.

In line with most of Europe, the current law allows abortion on demand in the first 14 weeks of pregnancy.

The proposed law will allow abortion only in cases of rape or when a risk to the mother's health has been proved by a medical certificate.

Prime Minister Mariano Rajoy's cabinet approved the draft bill last December in a move widely seen as a bid to soothe his party's right wing at a time of austerity and tax increases.

Pollsters Metroscopia said 60% of those asked wanted the law to stay the same. This rose to 71% amongst those in the 18 to 34 age bracket.

The measures are expected to be put to the vote in July in parliament, where the PP has an absolute majority. 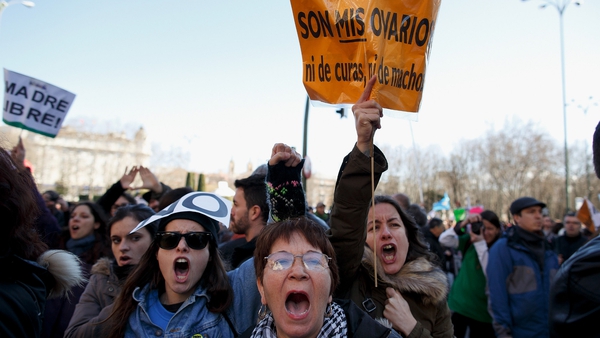