The US military has begun deploying assessment teams in Baghdad  to evaluate the state of Iraqi security forces.

About 90 additional troops arrived in Iraq to begin helping establish a Joint Operations Center in Baghdad with Iraqi forces.

Another 50 US military personnel working in the region are expected to arrive within the next few days to create four additional assessment teams.

US military personnel also are flying regular manned and unmanned reconnaissance flights over Iraq - about 30 to 35 a day - to give better insight about the situation on the ground and help the assessment teams, Adm Kirby said.

He urged them to stand with Baghdad in the face of a Sunni insurgent onslaught that threatens to dismember the country.

Security forces fought Sunni armed factions for control of the country's biggest oil refinery today and militants launched an attack on one of its largest air bases less than 100km from the capital.

More than 1,000 people, mainly civilians, have been killed in less than three weeks, the United Nations has said.

It described the figure as "very much a minimum".

The number includes unarmed government troops machine-gunned in mass graves by insurgents, as well as several reported incidents of prisoners killed in their cells by retreating government forces.

Mr Kerry flew to the Kurdish region after a day in Baghdad on an emergency trip through the Middle East to rescue Iraq after a lightning advance by Sunni fighters led by an al-Qaeda offshoot.

The militants are members of the Islamic State of Iraq and Syria (ISIS), which is also known as ISIL.

US officials believe that persuading the Kurds to stick with the political process in Baghdad is vital to keep Iraq from splitting apart.

"If they decide to withdraw from the Baghdad political process it will accelerate a lot of the negative trends," said a senior State Department official who briefed reporters on condition of anonymity.

Kurdish leaders have made clear that the settlement keeping Iraq together as a state is now in jeopardy.

"We are facing a new reality and a new Iraq," Kurdish President Massoud Barzani said at the start of his meeting with Mr Kerry.

Earlier, he blamed Iraqi Prime Minister Nouri al-Maliki's "wrong policies" for the violence and called for him to quit, saying it was "very difficult" to imagine Iraq staying together.

The Kurds have ruled themselves within Iraq in relative peace since the US invasion that toppled Saddam Hussein in 2003.

However, they seized on this month's chaos to expand their own territory, taking control of rich oil deposits.

Kirkuk is a city they consider their historic capital and which was abandoned by the fleeing Iraqi army.

The Kurds' capture of Kirkuk eliminates their main incentive to remain part of Iraq: its oil deposits could generate more revenue than the Kurds now receive from Baghdad as part of the settlement that has kept them from declaring independence.

Some senior Kurdish officials suggest in private they are no longer committed to Iraq and are biding their time for an opportunity to seek independence. 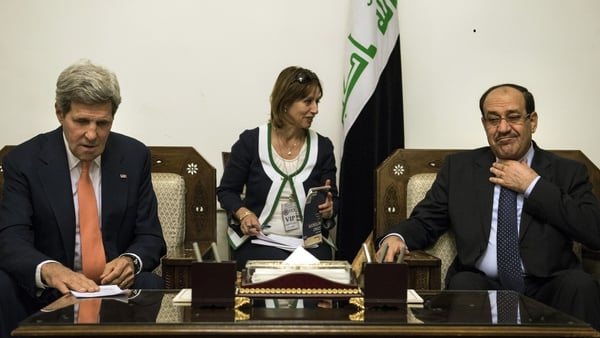