The Venezuelan government has introduced restrictions that will prevent students from there coming to Ireland to learn English.

The move also means more than 3,000 Venezuelans currently studying here may be forced to return home.

The Venezuelan government said it was taking the action on foot of investigations by Irish authorities into irregular practices at some colleges here.

Venzuela operates currency controls that place tight limits on the purchasing of euros by its citizens.

Until now students were able to buy euros if they could prove that they were travelling to Ireland to study.

However, the Venezuelan Government has said it will no longer authorise currency exchange for courses in Ireland.

Its also suspended the right of students currently here to receive any further funding from their families or savings held at home.

This means students here can only stay if they can find work to support themselves fully or can access funds from somewhere else.

In a statement the Venezuelan government said it was acting after reports that some colleges here had been falsifying the attendance records of students.

International students must attend at least 80% of classes in order to renew their visas.

They are allowed to work for up to 20 hours a week while they study.

There has been concern expressed that some colleges were facilitating people whose real purpose in coming to Ireland was to work.

In its statement the Venezuelan government has also threatened legal action against any Venezuelans who had been found to have abused currency control mechanisms by coming to Ireland under false pretences.

Venezuela has said students here will be allowed to change bolívars (the Venezuelan currency) up to the value of €1,000, but only in order to facilitate their return home.

Students have told RTÉ News this evening that they are extremely worried about the development and are not sure what to do now.

Venezuela introduced exchange controls over its currency in order to prevent the flight of capital from the country. 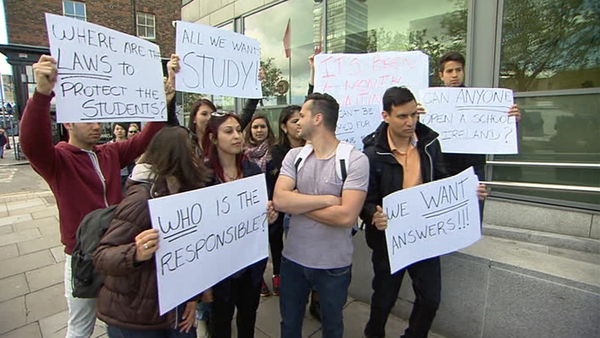