The Leader of the Seanad has withdrawn a claim that Senator Marc MacSharry had "a suggested conflict of interest" that should be examined before he could serve on the Oireachtas Banking Inquiry.

Fianna Fáil's Darragh O'Brien said it was not a coincidence that Fine Gael leader Maurice Cummins made the claim the day after Senator MacSharry was selected to serve on the banking inquiry.

Senator MacSharry was selected yesterday after a vote at a special Seanad Committee to pick the two senators to represent the Upper House on the Inquiry.

The Government's nominee, Labour's Susan O'Keeffe, was unsuccessful and as things stand the Government will not have a majority on the Banking Inquiry.

Senator O'Brien said that the Government wanted a majority on the inquiry and today's events cannot be dressed up in any other way.

The House had earlier been adjourned following Mr Cummins comments about Mr MacSharry.

The remarks were met with outrage from Fianna Fáil senators, who demanded that Mr Cummins withdraw them and it was an act of character assassination.

Mr Cummins said he did not plan to mention it, but said he had been pressed into it by the other side of the house.

Mr MacSharry said it was a disgraceful impugning of his character. Senator Thomas Byrne said it was a defamatory statement and should not be allowed to stand.

Two Labour senators were not present at last night's meeting. 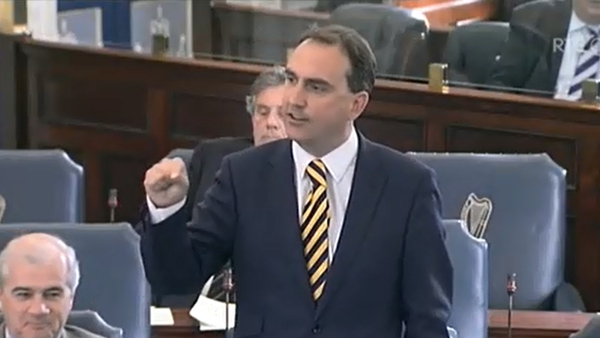