Pope Francis has denounced the "abyss" of the Nazi genocide, which claimed the lives of six million Jews, as he visited the Yad Vashem Holocaust museum in Jerusalem today.

Speaking at a solemn ceremony at the Hall of Remembrance after meeting survivors, he spoke of "the boundless tragedy of the Holocaust" describing it as an "unfathomable abyss."

Inside the long, dark stone room with an angled roof, Pope Francis spoke at a podium next to giant marble slab on which were engraved the names of 22 of the Nazi camps where millions were exterminated throughout Europe during World War II.

At the ceremony, a choir of school children dressed in yellow and black sang several famous Israeli songs, including a poem written by a young Jewish woman who was killed while on a mission to try to rescue Hungarian Jews due to be deported to the death camp Auschwitz.

Earlier, the Pope made an impromptu stop at a memorial for Israeli civilians killed in deadly militant attacks as he visited the national cemetery in Jerusalem.

The unscheduled visit to the monument,  which is located inside Mount Herzl cemetery, came just after Pope Francis had laid a wreath on the grave of Theodore Herzl, founder of modern Zionism.

It came after four people were killed on Saturday, including two Israelis, when a gunman opened fire on the Jewish Museum in Brussels, prompting the Pope to say he was "profoundly saddened" as he landed in Israel on the final leg of his Middle East tour.

As Israel and Palestinians indulge in point-scoring over such impromptu gestures, the Vatican has today denied that Pope Francis' trip is being driven by a political agenda.

Yesterday, Pope Francis made an unscheduled stop by the West Bank barrier, climbing out of his open vehicle to pray, his forehead and hand resting against the wall, in a powerful show of support for Palestinians.

Winding up his packed visit, the Pope issued a unique invitation to the Israeli and Palestinian presidents to pray with him at the Vatican to end their "increasingly unacceptable" conflict.

Palestinian president Mahmud Abbas accepted the invitation, saying he will go the Vatican on 6 June.

Israel President Shimon Peres also welcomed the invitation to pray at the Vatican but his office has not yet specified a date.

Pope signs guest book at Yad Vashem: “With shame for what man, who was created in the image of God, was able to do." http://t.co/U4Y0QNif7D 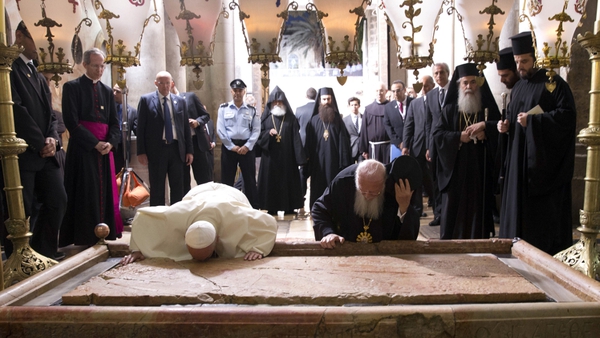