The Cork City Coroner has said a woman who lost her entire family as a result of a car crash in England, has shown great dignity and has to be commended for her selfless work in the area of suicide risk awareness.

Coroner Dr Myra Cullinane was speaking after a jury returned a narrative verdict in the death of Con Twomey, who died from injuries sustained in a car crash in Cornwall in July 2012.

The couple’s 16-month-old son Oisín died in the crash.

An inquest in Devon last November found that a taxi driver, Marek Wojciechowski, originally from Poland, deliberately drove his car into the path of the Twomey's vehicle.

He was arrested at the scene but died a short time later in hospital.

At today's inquest in Cork, the coroner outlined the findings of the inquest held last November into Oisín’s death.

She said the British jury had found that the cause of death was as a result of Mr Wojciechowski suddenly steering his car across the road, and accelerating into the oncoming traffic, in an attempt to take his own life.

Dr Cullinane said it was the same set of circumstances that led to the ultimate death of Mr Twomey.

As details of the injuries sustained by her husband were being read out, Mrs Twomey left the courtroom and did not return until the coroner had finished.

Dr Cullinan said it had been another difficult day for Mrs Twomey.

She said people are aware of the unspeakable tragedy that befell her and the loss of her beautiful family.

She said Mrs Twomey had shown great dignity and courage and had to be commended on her selfless work in the area of suicidal risk assessment so that no family ever goes through the devastating experience she went through.

She offered her deepest condolences and wished her well with her planned memorial and associated fund raising events.

Afterwards Mrs Twomey left without speaking to reporters but issued a statement.

She said: "This has been a very difficult two years for me and I would appeal to the media to please respect my privacy.

"I am grateful to all those including politicians, charities, the media and ordinary Irish and British people who have helped support my campaign for greater road safety and enhanced training resources for the Garda Síochána so that no other family has to endure the terrible loss that I have suffered.

"I especially wish to thank my family and Con's family for their incredible support.

"I wish to remember my 'beauties' - Con, Oisín and Elber Marie - as they were before that July day and do not feel it is appropriate to comment about them at this time.

"To that end, We have organised a special remembrance event, a 'remorial' so to speak, in north Cork in early June." 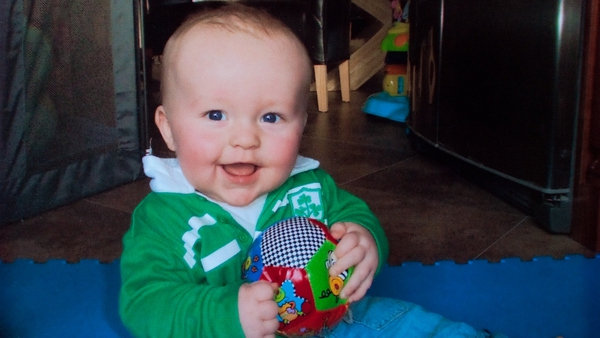