Ukraine's health ministry has raised the death toll from rebel raids in the separatist east of the strife-torn country to 17, adding that at least 36 soldiers had also been hospitalised.

The ministry said 16 troops died in the town of Volnovakha in the Donetsk region, in addition to one soldier killed in another attack in the neighbouring region of Lugansk.

The defence ministry had earlier confirmed the death of one soldier in another attack in the neighbouring region of Luhansk.

The deaths come ahead of a presidential election on Sunday, which is seen as crucial for Ukraine's fragile democracy.

Russia said yesterday that troops deployed for exercises near the Ukrainian border had dismantled equipment and were moving to train stations and airfields for return to their permanent bases, but the United States and NATO said then they saw no clear signs of a pullout.

Mr Rasmussen said on Twitter that he hoped today's activities were the start of a "full and genuine withdrawal".

Ukraine's ambassador to the European Union said Russia should face EU financial sanctions and lose the right to host the 2018 soccer World Cup because of its annexation of the Crimea region.

Asset freezes and visa bans adopted by the EU so far in response to Russia's actions in Ukraine did not go far enough, Kostiantyn Yelisieiev said yesterday.

Russia had crossed a red line by annexing Crimea and making aggressive moves towards eastern Ukraine and the EU must impose the tough economic sanctions it has threatened, he said.

"They must proceed with ... targeted, well-calibrated sanctions, mainly, in my view, of a financial nature," Mr Yelisieiev said, suggesting Russia be cut off from the SWIFT global electronic payments system.

The EU has imposed sanctions on 61 Russians and Ukrainians and frozen the assets of two Crimean companies in response to Russia's actions in Ukraine.

But its 28 member states are divided over imposing tougher trade or financial sanctions because of fears this would damage their own economies and provoke Russian retaliation. 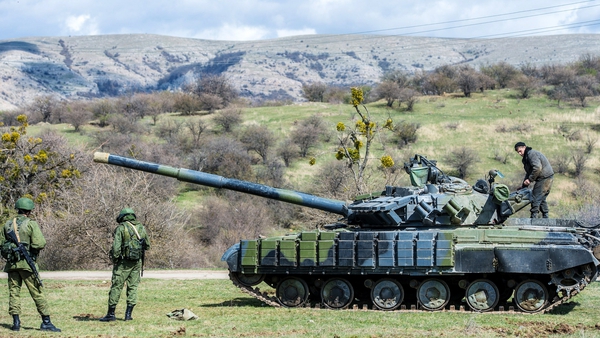