Sinn Féin President Gerry Adams has said he does not regret comments made by his party concerning his arrest earlier this month in connection with the murder of Jean McConville.

He said that he presented himself to the PSNI voluntarily because he wanted to confront the issue.

Mr Adams said he had concerns over the timing of his questioning. He said he does not think comments made by party colleague Martin McGuinness were ill-judged.

The Sinn Féin leader said that the present Government stands for austerity.

What is important, he said, is that parties of the left are, between them, fielding more than 100 candidates in this week's elections.

He said the left is mounting a serious challenge to the political establishment. He said people want real accountability and an alternative to the main parties.

Voters had lost confidence in Europe, he added.

He said this can be changed if the institutions can be persuaded to support a new economy and a green economy can provide a solution.

Mr Ryan said Minister for the Environment Phil Hogan had made a mess of water charges.

He said the Government has not learned the lessons of the boom and bust of the last 15 years.

They have planned for the building industry and not to provide housing solutions, he said.

He said that Socialist Party candidates have a record in protecting local services, such as the emergency department at Blanchardstown Hospital and against water and other charges.

Mr Higgins said a strong vote for Paul Murphy and Ruth Coppinger and the anti-austerity alliance and passing on preferences to other left candidates will point to the need to build a new mass movement of ordinary working people, unemployed people and pensioners who will stand and fight austerity.

Labour leader Eamon Gilmore has said that he is quite confident about the party's performance, despite a number of opinion polls indicating its support is down.

Mr Gilmore added that opinion polls don't always predict elections, while also pointing out that both Lorraine Higgins and Emer Costello are in contention for European seats.

Mr Kenny was on a canvass for the Longford-Westmeath by-election when he crossed the road to shake hands with Sgt McCabe who was on duty in Mullingar. 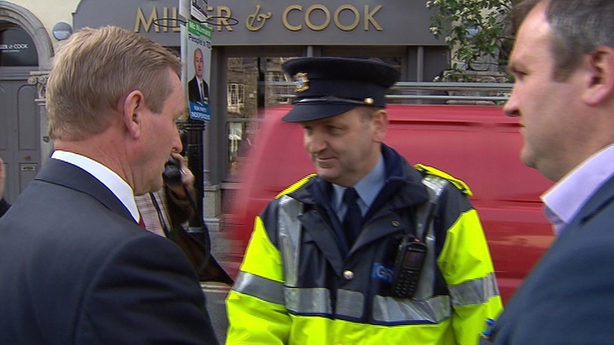