Chinese satellites have spotted objects floating in the southern search area for the missing Malaysia Airlines plane that could be debris and has sent ships to investigate.

"Chinese ships have been dispatched to the area. Beijing is expected to make an announcement in a few hours," Malaysian Defence Minister and acting Transport Minister Hishammuddin Hussein told reporters.

One of the objects was very large, measuring 22.5 metres by 13 metres, the ministry said in a statement, correcting the minister's earlier statistics of 22 metres by 30 metres.

"This information was received by phone during the press conference, and was initially misheard," the ministry said.

The object was floating 120km from possible debris announced by Australia in the search.

"The location of the suspicious object is along the southern corridor missing Malaysia Airlines Flight MH370 might have taken," it said, adding the object was spotted on 18 March, two days after the satellite image announced by Australia.

Six aircraft and two merchant ships are now scouring an area of the remote southern Indian Ocean where suspected debris was spotted by satellite earlier this week.

Australia, which announced the potential find and is co-ordinating the rescue, has cautioned the objects might be a lost shipping container or other debris.

"Even though this is not a definite lead, it is probably more solid than any other lead around the world and that is why so much effort and interest is being put into this search," Australian Deputy Prime Minister Warren Truss told reporters at a Perth air force base.

China, Japan and India are sending more planes and Australian and Chinese navy vessels are also steaming towards the zone, more than 1,220 nautical miles (2,000km) southwest of Perth.

Weather conditions are good, with 10km of visibility, according to search officials - a crucial boost for a search that is relying more on human eyes than the technical wizardry of the most advanced aircraft in the world.

"While these aircraft are equipped with very advanced technology, much of this search is actually visual," said Mr Truss, who also warned that the objects detected by satellites may now be at the bottom of the Indian Ocean.

"It is a very remote area, but we intend to continue the search until we are absolutely satisfied that further searching would be futile, and that day is not in sight," he said.

"The plan is we want to find these objects because they are the best lead to where we might find people to be rescued," he said.

Malaysian Defence Minister Hishammuddin Hussein said searchers were facing the "long haul" but were conscious that the clock was ticking.

The plane's "black box" voice and data recorder only transmits an electronic signal for about 30 days before its battery dies, after which it will be far more difficult to locate.

Aircraft and ships have also renewed the search in the Andaman Sea between India and Thailand, going over areas that have already been exhaustively swept to find some clue to unlock one of the biggest mysteries in modern aviation.

Investigators suspect the Boeing 777, which took off from Kuala Lumpur for Beijing shortly after midnight on 8 March, was deliberately diverted thousands of miles from its scheduled path.

They say they are focusing on hijacking or sabotage but have not ruled out technical problems.

The Telegraph newspaper published what it said was a transcript of communications between the cockpit of Flight MH370 and Malaysian air control, but few if any new clues emerged.

The search itself has strained ties between China and Malaysia, with Beijing repeatedly leaning on the Southeast Asian nation to step up its hunt and do a better job at looking after the relatives of the Chinese passengers.

For families of the passengers, the process has proved to be an emotionally wrenching battle to elicit information, their angst fuelled by a steady stream of speculation and false leads.

Some experts have argued that the reluctance to share sensitive radar data and capabilities in a region fraught with suspicion amid China's military rise and territorial disputes may have hampered the search.

Two people familiar with the investigation said the search had been slowed in some cases by delays over the paperwork to allow foreign maritime surveillance aircraft into territorial waters without a formal diplomatic request.

Truss said he was grateful for the search craft offered by China and others, which are expected to arrive at the Australian airforce base on Saturday.

Australian rescue coordinators said they are awaiting confirmation of the planes and ships offered before they are included in any search schedules. 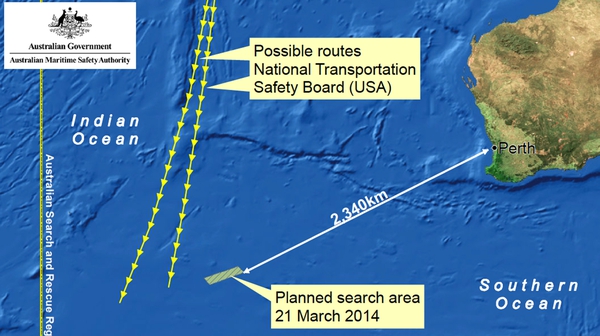