Fianna Fáil leader Micheal Martin has strongly criticised Minister for the Environment Phil Hogan over the redrawing of the local election boundaries.

Speaking at the party’s Ard Fheis in Co Kerry, Mr Martin described it as the biggest example of gerrymandering or manipulation of electoral areas in 35 years.

He claimed that the terms of reference given to the Local Electoral Area Boundary Committee were drawn up in such a way "to give extra seats where it matters to Fine Gael and Labour."

Minister Hogan described the comments as a cheap political stunt from the leader of a party that had invented gerrymandering.

He said Mr Martin is obviously desperate to try to get some attention for his party in advance of the Local Elections.

Mr Hogan said the Fianna Fáil leader is well aware that the review had a specific goal of improving balance and consistency in representational ratios in local government, while taking particular account of factors such as the location of towns in the new municipal governance arrangements provided for in the Action Programme for Effective Local Government.

He added that Mr Martin should apologise for casting aspersions on the members of the Independent Committee who made the recommendations.

About 3,000 delegates are due to attend the Fianna Fáil Ard Fheis in Killarney over the weekend.

The Ard Fheis is taking place nine weeks before the European and Local Elections, which will be a major test for the party and for its leadership.

At the last Local Elections in 2009, Fianna Fáil received 25% support. However, two years later in the General Election the party's vote dramatically fell to 17%.

What next for Fianna Fáil? Read a blog by Brian Dowling of RTÉ’s Political Staff

Based on the latest opinion polls, the party stands at between 19-22%, but the May elections will provide electoral clarity on its position and attempts to rebuild the party.

The elections will be a key focus of the Ard Fheis.

The party has selected over 400 candidates in the Local Election and is running five in the European Election.

Fianna Fáil will be particularly focusing on building its support in the capital, where it currently has no TDs.

Many candidates will join the party's spokespeople in a series of discussions tomorrow on a number of issues.

Delegates will also vote on 220 motions, ranging from calls for an independent police commission to proposals for the negotiation of a new national wage agreement, to the consideration of the party fielding candidates in Northern Ireland in 2019.

The event will conclude tomorrow evening with a televised address by Mr Martin. 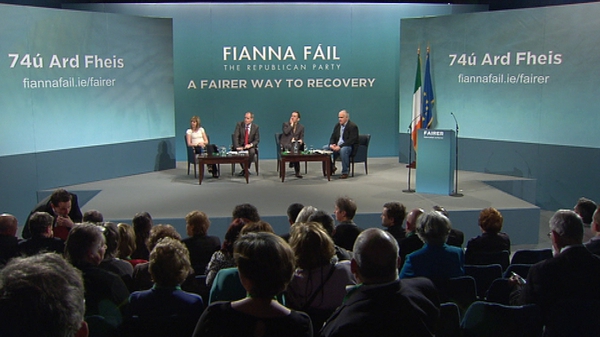