Turkish President Abdullah Gul said it was unacceptable to impose complete bans on social media platforms after a court decision to block access to Twitter.

Writing on Twitter, Mr Gul said only individual internet pages should be blocked if a court ruled that an individual's privacy had been violated, adding he hoped the current block would not last long.

Turkey's main opposition party is to file a legal challenge against the court decision to block access to Twitter.

Republican People's Party (CHP) deputy Akif Hamzacebi said his party would file a criminal complaint against Prime Minister Tayyip Erdogan on the grounds that he was violating personal freedoms.

The Twitter block comes days before elections and as Mr Erdogan battles a corruption scandal that has seen social media platforms awash with alleged evidence of government wrongdoing.

The ban came hours after a defiant Mr Erdogan, on the campaign trail ahead of key 30 March local elections, vowed to "wipe out" Twitter.

He said he did not care what the international community had to say about it.

His ruling AK Party has already tightened internet controls, handed government more influence over the courts, and reassigned thousands of police and hundreds of prosecutors and judges as it fights a corruption scandal he has cast as a plot by political enemies to oust him.

Telecoms watchdog BTK said the social media platform had been blocked by the courts after complaints were made by citizens that it was breaching privacy. 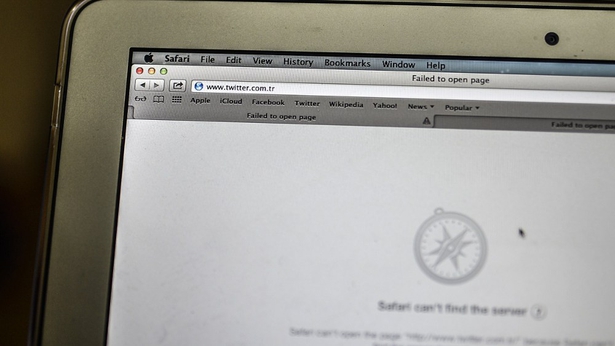 "Because there was no other choice, access to Twitter was blocked in line with court decisions to avoid the possible future victimisation of citizens," it said.

San Francisco-based Twitter said it was looking into the matter, but had not issued a formal statement.

The company did publish a tweet addressed to Turkish users instructing them on how to continue tweeting via SMS text message.

"We will wipe out all of these," said Mr Erdogan, who has cast the corruption scandal as part of a smear campaign by his political enemies.

"The international community can say this, can say that. I don't care at all. Everyone will see how powerful the Republic of Turkey is," he said in a characteristically unyielding tone.

Some users trying to open Twitter.com were taken to a statement apparently from another regulator (TIB) citing four court orders as the basis for the ban.

The corruption investigation became public on 17 December last when police detained the sons of three cabinet ministers and businessmen close to Mr Erdogan.

The three ministers resigned a week later, while others were removed in a cabinet reshuffle.

At an extraordinary session on Wednesday, parliament's speaker blocked opposition pleas to have a prosecutor's report with allegations against the former ministers read out.

A document purporting to be that report appeared on Twitter last week.

It included alleged transcripts of wire-tapped phone conversations, pictures from physical surveillance and pictures of official documents accusing the former ministers and two of their sons of involvement with an Iranian businessman in a bribery and smuggling racket.

The document has not been independently verified.

Turkish internet users were quick to come up with ways to circumvent the block. The hashtag #TwitterisblockedinTurkey quickly moved among the top trending globally.

The disruption sparked a virtual uproar, with many comparing Turkey to Iran and North Korea, where social media platforms are tightly controlled.

There were also calls to take to the street to protest, although some users equally called for calm.

Nazli Ilicak, a columnist who used to work for the pro-government Sabah newspaper, described the move as "a civil coup" in an interview on broadcaster CNN Turk.

The move was only the latest clash between Turkey's ruling party and social media companies, including Google, Facebook and Twitter.

After a series of popular protests partly fuelled by Twitter last summer, Mr Erdogan slammed the service as "a scourge".

Shortly thereafter, a government minister asked Twitter to establish an office in Turkey so that it could better communicate requests to take down content or hold the company accountable to Turkish law. Twitter did not respond to the request.

Mr Erdogan said two weeks ago that Turkey could also ban Facebook and YouTube, which he says have been abused by his enemies after a stream of audio recordings purportedly revealing corruption in his inner circle emerged online.

But a senior official said today there were no immediate plans to do so.

"The path was taken to block access within the framework of a court decision because of the failure to overcome the problem with the management of Twitter," the official said.

"At the moment there is no such a decision for Facebook and other social media," he said.

Minister for European Affairs Paschal Donohoe has said he is concerned about the blocking of Twitter in Turkey.

He said: "Internet freedom and the ability to communicate through any medium, including digital media, is a fundamental value which needs to be protected and respected, not restricted." 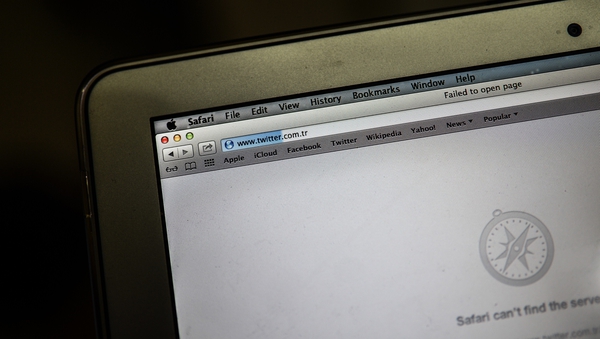