In a phone call the two leaders also agreed that Ukraine's territorial integrity had suffered "unacceptable blows", according to a German government spokesman.

Mr Obama and Ms Merkel spoke after President Vladimir Putin signed a treaty claiming the Black Sea region of Crimea as Russian territory, and as Ukraine warned the showdown had entered a "military stage" after soldiers were killed on both sides.

"The one-sided declaration of Crimea's independence and the absorption into the Russian Federation that started today are unacceptable blows against the territorial integrity of Ukraine," German spokesman Steffen Seibert said in a statement.

In a statement issued by the White House the leaders warned "there would be costs" for Russia's moves.

"They agreed it was vital to send international monitors from the Organisation for Security Cooperation in Europe and the United Nations to southern and eastern Ukraine immediately," the statement said.

However, both Berlin and Washington said there was room for negotiations to de-escalate the situation.

"Both leaders agreed to continue to underscore to Russian President Putin that there remains a clear path for resolving this crisis diplomatically, in a way that addresses the interests of both Russia and the people of Ukraine," the White House statement said.

One Ukrainian serviceman was killed and another was wounded during a raid on a Ukrainian military base in Crimea.

Mr Yatsenyuk described the attack as a "war crime".

Until now, forces deployed on the Black Sea peninsula, taken over three weeks ago by Russian forces, had been told to avoid using arms against attack.

Addressing a special joint session of parliament in Moscow, Mr Putin accused the West of reverting to Cold War containment by trying to stop the Ukrainian region joining Russia.

He defended Russia's actions in the crisis over the Black Sea peninsula, which has pushed relations with the West to a post-Cold War low.

To the Russian national anthem, Mr Putin and Crimean leaders signed a treaty on making Crimea part of Russia. 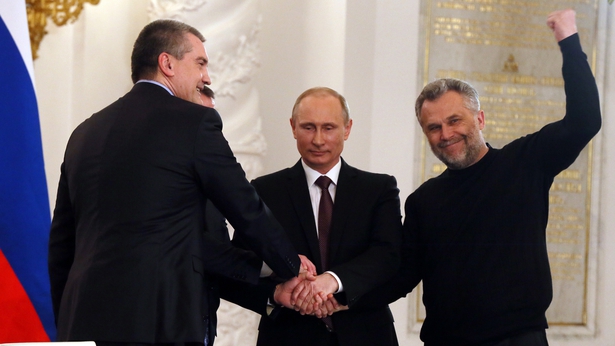 "Russia has disregarded all calls to step back into line with international law and continues down the dangerous path.”

Mr Rasmussen said there was no justification for the action, which would "deepen Russia’s international isolation."

Meanwhile, a spokesman for European Council President Herman Van Rompuy has denied a report by a Russian news agency that he would meet Mr Putin in Moscow tomorrow.

"No. President Van Rompuy will not go to Moscow tomorrow," Preben Aamann, a spokesman for Mr Van Rompuy, said.

"He will be preparing for the European Council in Brussels on Thursday and Friday this week."

There has been widespread condemnation of Mr Putin’s actions by Western political leaders.

Chairman of the European Parliament Committee on Foreign Affairs Elmar Brok said the European Union would impose increased sanctions on Russia if it continued to ignore international law.

Speaking on RTÉ's News at One, Mr Brok said: "Russian propaganda" ignored the reality that it had occupied another country and held a referendum, and that this was a clear breach of Crimea's constitutional laws and of international laws.

He called Russia's behaviour akin to that of the "big powers of the 19th Century".

"We have suspended all such cooperation," Mr Hague told parliament, saying a technical cooperation agreement and joint naval exercises with Russia, France, Britain and the US had been put on hold.

In his speech, Mr Putin had said that the Crimean issue was of "historic importance for all of us."

Addressing members of his government, business leaders and Crimean leaders, he said: "In the hearts and minds of people, Crimea has always been and remains an inseparable part of Russia.

"This commitment, based on truth and justice, was firm, was passed from generation to generation," he said in the speech lasting 47 minutes.

He depicted the Black Sea peninsula as a holy place for Russia and accused the West, which has imposed sanctions on some Russians and Ukrainians, of crossing a red line.

Mr Putin dismissed concerns that Russia would try to seize other regions in Ukraine.

But he added: "Our Western partners, headed by the United States, prefer not to be guided by international law in their practical policies, but by the rule of the gun."

"They have come to believe in their exceptionalism and their sense of being the chosen ones. That they can decide the destinies of the world, that it is only them who can be right."

It came one day after it voted overwhelmingly for union with Russia in a referendum which the West said was illegitimate.

Mr Putin also heavily criticised the new leadership in Kiev, which ousted Moscow-backed President Viktor Yanukovych on 22 February, saying they had opened the door to "neo-Nazis".

"Those who were behind recent events, they were ... preparing a coup d'etat, another one. They were planning to seize power, stopping at nothing. Terror, murder, pogroms were used," he said.

"It is primarily they who are deciding how Ukraine lives today. The so-called Ukrainian authorities introduced a scandalous law on the revision of the language policy, which directly violated the rights of the national minorities."

Crimean Deputy Prime Minister Rustam Temirgaliyev said the region would adopt the Russian rouble as the official currency and drop the Ukrainian hryvnia from April. 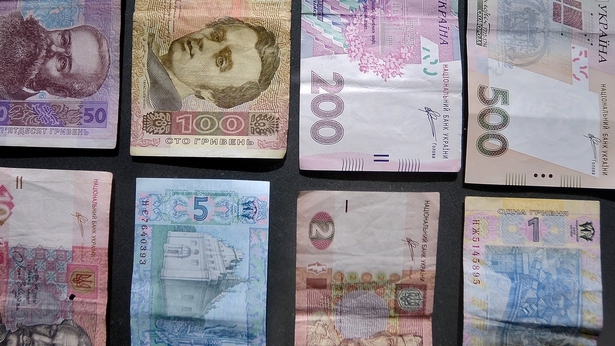 Crimean authorities had earlier said the hryvnia would remain an official currency until 2016.

Within hours of the referendum result, the Crimean parliament formally asked that Russia "admit the Republic of Crimea as a new subject with the status of a republic".

The US and EU have imposed personal sanctions on Russian and Crimean officials.

US President Barack Obama imposed sanctions on 11 Russians and Ukrainians blamed for the seizure, including Mr Yanukovych, and Vladislav Surkov and Sergei Glazyev, two aides to Mr Putin.

Mr Putin himself, suspected in the West of trying to resurrect as much as possible of the former Soviet Union under Russian leadership, was not on the blacklist.

A White House spokesman declined to rule out adding him at a later stage.

Amid fears that Russia may move into eastern Ukraine where there is a significant Russian-speaking community, Mr Obama warned that "further provocations" would only increase Russia's isolation and exact a greater toll on its economy.

"If Russia continues to interfere in Ukraine, we stand ready to impose further sanctions," he said.

A senior US official said Mr Obama's order cleared the way to impose sanctions on people associated with the arms industry and targets "the personal wealth of cronies" of the Russian leadership.

In Brussels, the EU's 28 foreign ministers agreed to subject 21 Russian and Ukrainian officials to visa restrictions and asset freezes for their roles in the events. They included three Russian military commanders in Crimea and districts bordering on Ukraine.

There were only three names in common on the US and European lists - Crimean Prime Minister Sergey Aksyonov, Crimean parliament Speaker Vladimir Konstantinov and Leonid Slutski, chairman of the Russian Duma's committee on the Russian-led Commonwealth of Independent States, or CIS, grouping former Soviet republics.

The EU blacklisted My Yanukovych earlier this month.

The US list appeared to target higher-profile Russian officials close to Mr Putin, including a deputy Russian prime minister, while the EU went for mid-ranking officials who may have been more directly involved on the ground.

The US and the EU said further steps could follow in the coming days if Russia does not back down and if it formally annexes Crimea.

Mr Obama said he would travel to Europe next week and that Vice President Joe Biden was heading to Poland and Lithuania to reassure US allies in the region.

A senior Obama administration official said there was "concrete evidence" that some ballots in the Crimea referendum arrived in some Crimean cities pre-marked.

Russian Deputy Prime Minister Dmitry Rogozin, who was named on the White House sanctions list, suggested that the measures would not affect those without assets abroad.

Meanwhile, Minister of State for European Affairs Paschal Donohoe has said the ultimate objective of the EU in how it approaches the crisis in Ukraine is to continue in dialogue with Russia.

Speaking on RTÉ's Morning Ireland, Mr Donohoe rejected suggestions that there was disagreement between international leaders about how sanctions imposed on Russian and Crimean officials involved in the seizure of Crimea would work.

Mr Donohoe said there was very clear agreement that these sanctions should be put in place and that the individuals concerned should be targeted.

However, he said the ultimate objective of the EU was to continue negotiations with Russia to lead to a peaceful solution.

Minister Donohoe said EU leaders would continue to argue and be clear at a meeting of heads of state later this week that the referendum on the status of Crimea was illegal. 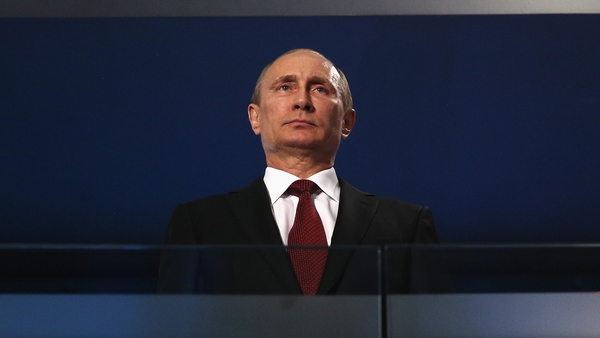