Minister for Health James Reilly has defended his plans for universal health insurance in his address at the opening session of the Fine Gael Ard Fheis.

Mr Reilly said that without reform, taxes would go up and services would come down.

However, he said with the right kind of reform, costs could be lowered and services improved with safer outcomes for patients.  He said a national consultation would begin when the White Paper was published.

Paying tribute to the families who lost babies at Midland Hospital Portlaoise, he said no patient, or parent, should have to struggle so hard to have their voice heard and respected.

Earlier Taoiseach Enda Kenny said today's report on the deaths in Midland Regional Hospital in Portlaoise made for grim reading and no family should have to fight for truth in our health system.

In his opening address to the Fine Gael Ard Fheis, Mr Kenny said all 11 recommendations in the report have been accepted and are being implemented from today.

He conveyed his sympathy to the families and also praised Minister for Health James Reilly's swift action on the matter.

Mr Kenny said he wanted to ensure that Ireland continued to be recognised as one of the safest countries in the world in which to give birth.

The Taoiseach defended his Government's progress in health reform, saying hospital waiting lists and the numbers on trolleys in emergency departments had reduced.

He said universal health insurance would be introduced in 2019 - prompting the biggest ever public consultation in the history of our health service.

Mr Reilly also said a new Patient Safety Agency would be established in the coming weeks, which would be a champion for patients and make safety a primary concern.

The Fine Gael Ard Fheis opened in Dublin this evening with a session devoted to reform of the health service.

With local and European elections on the horizon this is an important showcase for the main Government party.

After Taoiseach Enda Kenny’s opening address this evening the first session will be devoted to Minister for Health James Reilly’s plans for universal health insurance.

There are suggestions of tensions between the Minister and the Department of Finance over the cost of the scheme. 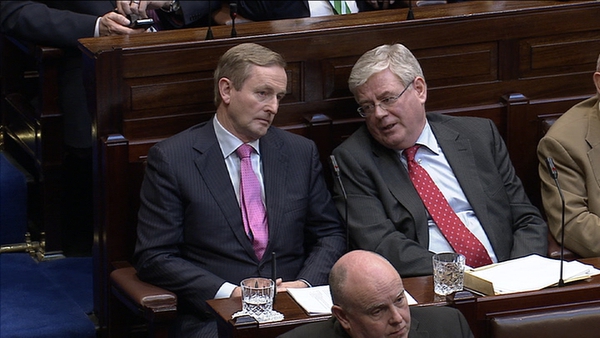