Met Éireann has warnred of wind gusts of up to 160km/h in Co Cork and Co Kerry.

A status ‘red’ severe weather warning is in place from 6am as forecasters predict stormy conditions including high winds and high seas.

Temperatures were expected to fall below zero in parts of the country overnight.

23 gritting trucks have been deployed, however the local authority warned that ice-free roads can not be guaranteed.

Vehicles have been abandoned on the Back of Errigal Road between Glenveagh National Park and Dunlewey and there have been minor accidents in Stranorlar, Letterkenny and on the Lifford to Letterkenny road.

Roads in Galway and Mayo are passable but care is advised following snow and hail showers.

A number of roads in Connemara have icy stretches. Particular caution is needed on the N59 between Maam Cross and Oughterard, as well as on the Cornamona to Clonbur road.

Gardaí in Co Mayo say there are icy patches on roads around Charlestown, Swinford and Kilkelly. Care is also advised on secondary roads close to Castlebar.

The M18 from Gort to Ennis is described as treacherous in places and extreme care is advised after intermittent snow and hail showers.

Earlier snow falls in Tuam have melted away and no problems are reported with roads in the area. 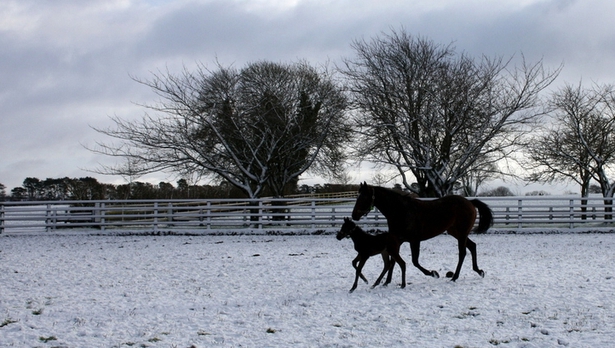 Send your weather images to yourphotos@rte.ie or via twitter @rtenews.

Meanwhile, a senior engineer with Clare County Council has said that damaged tourist areas of the county must be repaired without delay.

Tom Tiernan said significant repairs must be made to up to 40 sites across the county.

His comments come after the council stated that the cost of repairing the damage done by recent storms could be €35m.

"There are a total of 40 sites containing public infrastructure along the coast of Clare, from Galway Bay and up into the Shannon Estuary.

"There are several key locations that are a key component to the tourist industry, which is a cornerstone of the economy of Co Clare.

Elsewhere, Minister for Public Expenditure Brendan Howlin has said the Government has decided to give €500,000 to the St Vincent De Paul society and a further €500,000 to the Irish Red Cross so that they will have as many vehicles as possible to distribute relief.

He said the next phase will be to get full oversight of the damage to infrastructure around the country.

He said the Government will be getting a report on the damage from the Minister for the Environment today.