Taoiseach Enda Kenny has said that the scale of flooding has to be exceptionally extensive in order to qualify for extra EU relief funds.

However, Mr Kenny told reporters in Co Galway that the Government will examine the possibility of obtaining such funds.

Mr Kenny said when the river Rhine overflowed in Germany with enormous consequences, the scale of damage was unprecedented.

He said the damage caused in Ireland by recent flooding is also unprecedented.

Mr Kenny said that an accurate, up-to-date account of the impact of flooding will be presented by Minister for State Brian Hayes to Cabinet next Tuesday.

Earlier, the Minister for Finance said that additional funding will be made available to deal with the aftermath of recent flooding.

Speaking in Limerick Michael Noonan said he expected that the scale of devastation caused in recent weeks would mean that more money would be needed from central Government.

He said this would be provided from the national budget and that the amounts required would be affordable in the overall national context.

Mr Noonan said the Government would continue to ask individual local authorities to estimate the cost of damage and then when the overall situation was clear, funds would be made available.

He said he felt people understood the unprecedented nature of recent weather events and expressed his sympathies to those affected.

Minister of State for the Office of Public Works Brian Hayes said a full assessment of the damage in western counties from last month was due tomorrow and a memo would be brought before Cabinet next week.

The ministers from the Department of Finance were accompanied by local junior minister Jan O'Sullivan and Government TDs as they surveyed damage around St Ita's Street this afternoon.

Ms O'Sullivan earlier said there was no doubt that extra funding would have to be provided.

Speaking on RTÉ's News At One, she said the Cabinet was due to hear a report next week on the flooding in January.

Ms O'Sullivan, who has responsibility for housing and planning, said the report will now include the latest difficulties around the country.

Residents in affected areas of Limerick have been working to clean-up damaged homes and streets.

Sports halls are serving as drop-in centres and hot meals are being delivered to those who have been left without cooking facilities in recent days.

Cork City Council is warning that high tide tomorrow evening could cause even greater damage than flooding experienced this morning.

The local authority said further serious flooding is anticipated between 8pm and 10pm tomorrow and advising motorists and pedestrians to avoid the city centre.

There was also flooding in some coastal villages along the Waterford and Wexford coasts. The promenade in Tramore was badly flooded, as was the Kilmeaden to Carrick-on-Suir road.

Dozens of houses in Passage East were flooded, some for the first time in living memory.

There was also severe flooding in the villages of Cheekpoint, Ballyhack and Arthurstown.

Gardaí in New Ross and Rosbercon are still warning motorists to avoid parts of the town due to severe tidal flooding and at one stage the quay was impassable.

Parts of the centre of Drogheda in Co Louth were hit by flooding this afternoon.

The River Boyne burst its banks at Wellington Quay and the North Quay.

A section of Flood Street close to the Spanish Arch is flooded, causing traffic delays.

There are also growing concerns over the flooding of homes along the River Shannon in counties Offaly, Westmeath, Roscommon and Longford.

Over the weekend, another 300 acres of land was covered by water, according to the Irish Farmers' Association.

Some of the worst-hit areas are at Shannon Harbour in Co Offaly, the Camlin river basin in Co Longford and along the Shannon at Portrunny in Co Roscommon.

Met Éireann weather warnings are in effect for much of the country.

Athlone Town Council has warned residents in low-lying housing estates along the river Shannon that flooding in homes could occur by the end of the week.

This afternoon the council has confirmed that levels on the Shannon will have returned by Thursday to the dangerous heights of three weeks ago.

It said that if high winds and heavy rainfall continue there will be flooding on low-lying areas such as Deerpark, Parnell Square and adjoining estates.

The council said it has activated a Flood Emergency Response Plan.

As part of the plan, a range of precautionary measures are being implemented to reduce the risk of flooding and to provide assistance in the areas at most risk.

Limerick City and County Council's Director of Transport and Travel said the scale of flooding on Saturday morning surpassed anything the local authorities anticipated.

Paul Crowe told RTÉ's Morning Ireland that the incident involved the highest tide ever recorded in the city.

Mr Crowe said if the local authorities had known what they were likely to face, including the scale and extent of it, they would have done more to prepare for the situation.

Councils had taken mitigation measures in areas that were affected by storms in early January and those defences had held up, he added.

Mr Crowe also said it was not possible to put a figure on the cost of the damage at this stage.

However, he added that the clean-up costs would be beyond the resources of the local authorities and they would be looking for national assistance.

Meanwhile, farmers in part of west Co Sligo have appealed to the Minister for Agriculture for special consideration in relation to their area aid payments after about a hundred of acres of land were seriously affected by the storm at the weekend.

JP Cowley from Rathlee, near Enniscrone, said that farmers would not be able to work the land, which has been showered by rocks and stones, while fences have been ripped up and land eroded.

A road leading from Rathlee to Pullaheeney Pier has been totally destroyed and fishermen have lost nets and other fishing gear as a result. 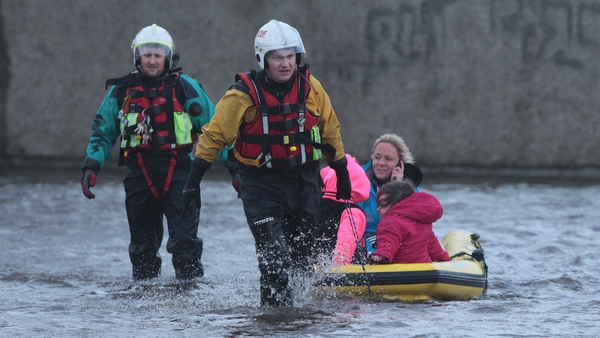