Less than 5% of the most dangerous chemicals in Syria's arsenal have left the country, sources close to the world's chemical watchdog said this afternoon.

It said the regime will be pressured to move faster on divestment.

Just two shipments of around 16 metric tonnes each of Category 1 chemicals have left Syria's port of Lattakia this month.

It is part of an internationally-backed disarmament plan supervised by the UN and the Organisation for the Prohibition of Chemical Weapons.

That is less than 5% of the approximately 700 tonnes of chemicals that were supposed to have left Syria by 31 December last year.

The sources said that an OPCW Executive Council meeting in The Hague tomorrow would try to put pressure on the Syrians and "remind them of their obligations", ahead of a 30 June deadline for the destruction of all of Syria's dangerous chemicals.

The UN Security Council last year backed a US-Russian deal to eliminate Syria's vast chemical arsenal as a way to avert US strikes threatened after a massive chemical attack near Damascus that the US blamed on the regime.

Under the agreement, Syria's entire chemical arsenal is to be eliminated by the end of June.

Syria has declared around 700 tonnes of the most dangerous chemicals, 500 tonnes of less dangerous precursor chemicals and around 122 tonnes of Isopropanol in its arsenal.

Almost all the chemicals and precursors, except for the Isopropanol which is to be destroyed within the war-torn country, are supposed to be removed by 5 February.

"It's almost certain that deadline will not be met," a source said.

The around 120 tonnes of Isopropanol must be destroyed by 1 March.

Meanwhile, the two Syrian delegations at peace talks in Geneva have agreed to use the "Geneva I communique", a document agreed by international powers in June 2012, as the basis for peace talks.

Syrian state television has reported that the government delegation announced its "full readiness" to discuss the communique, which calls for a transitional government, "paragraph by paragraph”.

Opposition spokesman Louay al-Safi said the "regime has accepted but it wants the transitional governing body to be discussed at the end.

"We want it at the beginning ... we want to discuss its size and responsibilities."

Britain to take in refugees

Elsewhere, Britain is to take in hundreds of vulnerable Syrian refugees, targeting those most traumatised by the three-year civil war.

Though there is no set quota, the overall number is likely to be in the hundreds, his office said.

Britain will work with the United Nations High Commission for Refugees on a case-by-case basis to identify those most in need.

"I am pleased to be able to announce that the UK will be providing refuge to some of the most vulnerable Syrian refugees," Mr Clegg said.

"We are one of the most open-hearted countries in the world and I believe we have a moral responsibility to help.

"The UNHCR - which backs our new resettlement programme - has said the highest priority should go to women and girls who have experienced or are at risk of sexual violence; the elderly; survivors of torture and individuals with disabilities, so that's who we'll target.

"Sadly we cannot provide safety for everyone who needs it, but we can reach out to some of those who need it most."

Britain has defended its policy of focusing on giving aid rather than offering a comprehensive resettlement programme.

It has committed €600m in humanitarian aid to help alleviate the situation for displaced Syrians, making it the second-largest donor after the United States.

Britain has granted asylum to more than 2,000 Syrians since the uprising against President Bashar al-Assad began in March 2011 - 1,500 of them last year.

"We'll continue to support the peace talks currently taking place in Geneva, because only a political resolution between the Assad regime and Syrian opposition will provide a permanent end to the suffering," Mr Clegg added.

Amnesty International said last month that EU leaders should "hang their heads in shame" at their failure to provide safe haven for Syrian refugees.

The European Union has accepted 55,000 asylum seekers from Syria, according to the Amnesty report. 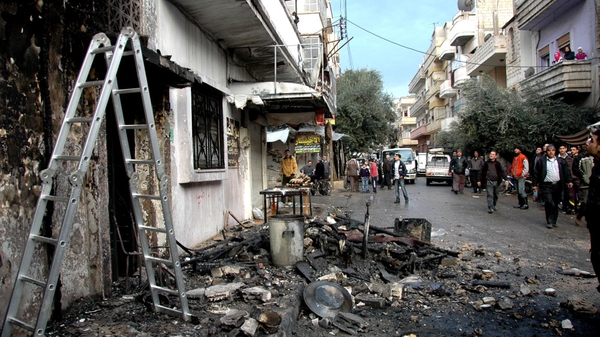