The Government's new economic plan says that it will be 2018 before unemployment falls below 10%.

The document, A Strategy for Growth, says unemployment will be 8.1% in the year 2020.

During the boom, the number of people out of work was below 5%.

It says the Government will be running a balanced budget in 2018, meaning that will be the first year it will be spending less than it will be taking in from taxes.

Taoiseach Enda Kenny said the plan was a "roadmap for the Irish economy".

He said by 2020 the Government aims to replace "all the jobs lost in the crisis and halve the rate of unemployment".

He added welfare reforms would be a big focus of 2014.

Mr Kenny said 2014 will be a year for jobs and everything that can be done will be done in the area.

Tánaiste Eamon Gilmore said "there was no question of suddenly loosening the purse strings" simply because the Government hits fiscal targets.

Mr Gilmore said the credit for the bailout exit rests with the Irish people and they should see some payback, though that might not happen immediately.

The Tánaiste said employment can grow over the next six years back to the level of the Celtic Tiger, but said they will be real and sustainable jobs.

He said people currently unemployed need to be in a position to take up those jobs.

Mr Gilmore added that Ireland will have to develop trading links with new economies and will need to diversify its export base.

He said the "centre of gravity in world trade is shifting to the east" and said Ireland has to build its relationships in these places.

Sinn Féin's Pearse Doherty said what appeared as an "early Christmas present" was very "hollow and contained nothing but empty speculation" when unwrapped.

He said the Government should urgently seek retrospective recapitalisation of the banks.

Mr Doherty said it should take debts "not belonging" to the ordinary people off their shoulders to start the economy again, otherwise little would change.

He said that as Ireland exited the formal bailout programme, this may have been a "missed opportunity".

Richard Boyd Barrett of the People Before Profit Alliance said it was more "Government hype".

He said the plan would have little impact on alleviating the hardship people had been enduring and continue to endure.

In a response on behalf of Sinn Féin to Enda Kenny's address on Ireland’s exit from the bailout, Mr Adams said the State was bankrupted through the recklessness, greed and incompetence of a golden circle of bankers, speculators and corrupt politicians.

He said Irish citizens will continue to pay back a debt that is not theirs. 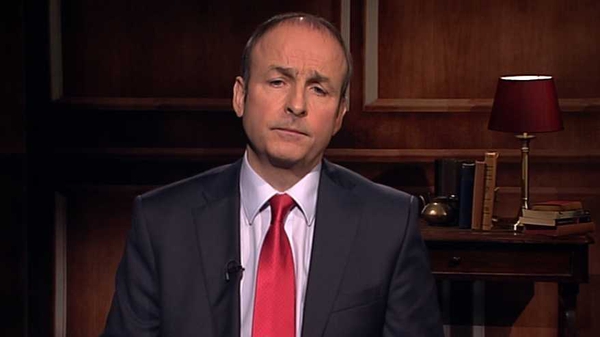