The world has been paying tribute to former South African president Nelson Mandela, who has died at the age of 95.

President Michael D Higgins tonight said: "It is with deepest sadness that I have learned of the death of former President of South Africa Nelson Mandela.

"Nelson Mandela is one of history's greatest leaders; a man whose unprecedented courage and dedication broke down the cruel barriers of apartheid in South Africa and led the nation into a new and democratic age.

"The immense moral force that was Nelson Mandela was built on his commitment to all of the people, and was motivated by a deep humanity and limitless compassion that was delivered with modesty and a powerful simplicity.

"His journey to the ending of apartheid and into a new chapter in South African and world history was long, hazardous and involved considerable self-sacrifice."

Taoiseach Enda Kenny TD paid tribute to Mr Mandela, saying that, with his passing, "a great light has been extinguished. Nelson Mandela was a freeman of our capital city and of the world.

"The name Mandela stirred our conscience and our hearts. It became synonymous with the pursuit of dignity and freedom across the globe."

"Today, a great light has been extinguished. The boy from the Transkei has finished his long walk. His journey transformed not just South Africa, but humanity itself.

"As we mark his passing, we give thanks for the gift of Nelson Mandela.

"We ask that his spirit continues to inspire, guide and enlighten us as we strive to bring freedom and dignity to the family of man, our brothers and sisters, across the world.

"I offer my deepest sympathies, on behalf of the Irish Government and people, to his family, to his friends and supporters, and to the Government and the people of South Africa."

British Prime Minister David Cameron said: "A great light has gone out in the world. Nelson Mandela was a towering figure in our time; a legend in life and now in death - a true global hero.

"Across the country he loved they will be mourning a man who was the embodiment of grace.

"Meeting him was one of the great honours of my life. My heart goes out to his family - and to all in South Africa and around the world whose lives were changed through his courage."

US President Barack Obama hailed Mr Mandela as a leader who left his country with a legacy of freedom and peace with the world.

"He achieved more than could be expected of any man," Mr Obama said at the White House shortly after the announcement of Mr Mandela's death.

"Today he's gone home, and we've lost one of the most influential, courageous and profoundly good human beings that any of us will share time with on this earth," Mr Obama said.

"He was a great unifier and a very, very special man in thisregard beyond everything else he did. This emphasis onreconciliation was his biggest legacy," de Klerk said in an interview with CNN after the announcement of Mandela's death.

De Klerk, who released Mandela from prison in 1990 and then negotiated the end of apartheid, called Mandela a "humane" and "compassionate" man who was able to understand the fears of South Africa's white minority in the transition to democracy.

Mandela and de Klerk shared the 1993 Nobel Peace Prize for ending minority white rule and laying the foundations of democracy.

De Klerk served as one of two deputy presidents in Mandela's government after the African National Congress won the 1994 elections.

Former US President Bill Clinton said: "Today the world has lost one of its most important leaders and one of its finest human beings.

"And Hillary, Chelsea and I have lost a true friend.

"History will remember Nelson Mandela as a champion for human dignity and freedom, for peace and reconciliation.

"We will remember him as a man of uncommon grace and compassion, for whom abandoning bitterness and embracing adversaries was not just a political strategy but a way of life.

"Our thoughts and prayers go out to Graça and his family and to the people of South Africa."

Fianna Fáil leader Micheál Martin said: "I was deeply saddened to learn tonight of the passing of a true hero of our time, Nelson Mandela.

"Mr Mandela was an icon of peace. His courage, his sacrifice and his unwavering faith in humanity was an inspiration to all of us.

"He has inspired many generations of people across the world, and that legacy will continue long after his passing."

Sinn Féin president Gerry Adams said: "It is with deep sadness that I learned of the passing of 'Madiba' Nelson Mandela.

"Nelson Mandela was a towering figure and an inspiration to freedom loving people the world over.

"I wish to extend on my own behalf and that of Sinn Féin, my heartfelt sympathy to Madiba's family, to the ANC and to the people of South Africa. Ní bheidh a leithéid ann arís."

"Nelson Mandela showed what is possible for our world and within each one of us if we believe, dream and work together for justice and humanity."

"Nelson Mandela's message will not disappear. It will continue to inspire fighters for freedom, and to give confidence to peoples in the defense of just causes and universal rights."

European Union foreign policy chief Catherine Ashton said that "more than anyone else, Nelson Mandela inspired my generation and our world."

Brazilian President Dilma Rousseff called Mandela "the biggest personality of the 20th century. Mandela conducted with passion and intelligence one of the most important processes of human emancipation in contemporary history - the end of Apartheid in South Africa."

Israeli Prime Minister Benjamin Netanyahu said Mandela was "one of the most honourable figures of our time ... a man of vision, a freedom fighter who rejected violence."

Moussa Abu Marzouk, a senior official of the Palestinian Islamist Hamas group said: "Today a great freedom fighter, Nelson Mandela has died, one of the world's most important symbols of freedom."

Swedish Prime Minister Fredrik Reinfeldt said: "Nelson Mandela was man who changed the world. He was as firm in his belief in the equal value of every human being as he was strong in his will and ability to bring about reconciliation.

"He chose reconciliation where others would have chosen vengeance. He created a new South Africa and gave people around the world a role model and an ideal."

Actress Charlize Theron, who was born in South Africa said: "My thoughts and love go out to the Mandela family. Rest in Peace Madiba. You will be missed, but your impact on this world will live forever."

American civil rights leader Jesse Jackson said: "My heart weighs heavy." He added: "The imprint he left on our world is everlasting."

London mayor Boris Johnson said: "When the definitive history of our time is written, the name Mandela will stand taller than most - perhaps tallest of them all.

"Nelson Mandela understood the most powerful tool at his disposal was the power of forgiveness. He faced down the tyranny and oppression of apartheid by embracing unity, by rejecting division, by proving without rancour or recrimination that his way was the right way, the best way, and the only way to bring about change."

He added: "The world has lost a man who brought a rainbow of possibilities to a country that was segregated into black and white." 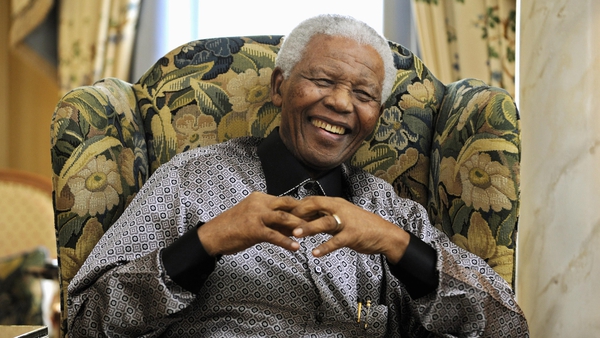