The Government is to curb the advertising of alcohol and set minimum prices for drinks based on their alcohol content in a new Public Health Bill.

It is the first time alcohol has been addressed in such a bill.

The measures were agreed by the Cabinet on Tuesday and published at Government Buildings this afternoon.

They will target cheap alcohol products relative to their alcohol content sold in off-licences and supermarkets by minimum unit pricing.

Alcohol advertising on television and radio will be restricted to evening hours from 2016.

Other measures include labelling all alcoholic drink containers with health warnings and pregnancy advice, as well as alcohol and calorie content.

The bill will see the eventual structural separation of alcohol from other products in mixed trading outlets, such as supermarkets.

Minister of Health James Reilly said the Government is committed to tackling drinking among young people.

Mr Reilly also said he wants to see an end to the occupation of 2,000 hospital beds each night due to alcohol-related illness and injuries.

Minister of State for Primary Care Alex White said the Government recognises the severe consequences of the misuse of alcohol.

Speaking on RTÉ’s News At One, Mr White said the Government will move with its counterparts in Northern Ireland to introduce minimum pricing.

He said a price would be set by statute or through regulations below which a particular item of alcohol cannot be sold legally.

Minister White said the advantage of this measure was that it addressed alcohol that was cheap relative to its strength, rather than addressing the issue through the excise system, which would put up the price of all alcohol.

Mr White said the measure would not affect the price of a pint or a drink in a pub or hotel.

He rejected suggestions that it would drive the illegal sale of alcohol in the black market, saying there was not much evidence to suggest this would happen.

Commenting on the fact that sponsorship of sports by drinks companies would not be included in this legislation, Mr White rejected suggestions that the issue would "wither and die".

The Irish Medical Organisation has welcomed the move. 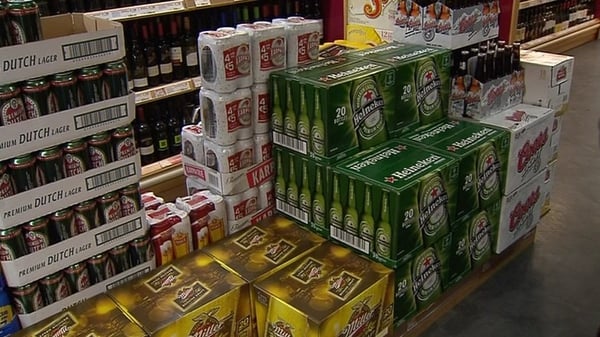 Bill on minimum alcohol pricing to be published