Britain's Foreign Secretary William Hague has said Iran must match its new talk of improving relations with the international community with actions.

He urged Iran to take "concrete steps" to address concerns over its behaviour.

The two foreign ministers met as politicians gathered for the United Nations General Assembly in a sign of a possible thaw in relations with Iran following the election of President Hassan Rouhani.

"The United Kingdom does not seek a confrontational relationship with Iran and is open to better relations," Mr Hague said.

The talks come as tension between Iran and the West appeared to have eased in recent days, with Mr Rouhani saying he is ready for talks over the nuclear programme.

British Prime Minister David Cameron made the unusual move of writing to Mr Rouhani following his election earlier this year, expressing the hope that there could be a step-by-step improvement in relations between the two countries.

Mr Rouhani, who is seen as a moderate cleric, called for dialogue with the West after winning a landslide victory in the 14 June presidential elections.

Britain has not had a diplomatic presence in Iran since November 2011 when its embassy in Tehran was stormed by a mob, triggering one of the worst crises between the two countries since the 1979 Islamic revolution.

Mr Hague said he and Mr Zarif had agreed on the need to restart talks on the nuclear programme between Iran and the E3+3 group consisting of the United States, Russia, China, the United Kingdom, France and Germany.

He added that Iran could play a "constructive role" by backing negotiations to end fighting in Syria, which is in the spotlight for alleged chemical weapons use by President Assad's forces in a conflict that has killed more than 100,000 people.

Israel believes an Iranian bomb could be months away

Meanwhile, Israel voiced concern over a potential meeting of the US and Iranian presidents, saying Iran sought reconciliation with world powers as a ruse to press on with its nuclear programme.

US officials also said a meeting was possible this week between President Barack Obama and Mr Rouhani - a landmark after over three decades of hostility.

Israel believes an Iranian bomb could be months away from production and may now be expedited should world powers back off sanctions and readiness for a war of last-resort against Iran.

It has also tried to shift scrutiny to Israel's assumed atomic arsenal. 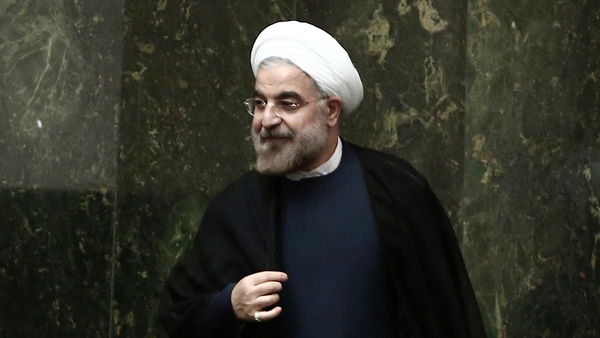