Security forces and militants fought gun battles today during a government operation to seize back control of a town near Cairo dominated by Islamist supporters of ousted President Mohammed Mursi.

A police general was killed by gunfire and at least nine policemen and soldiers were wounded by a hand grenade in the clashes in Kerdasa, 14km from the capital.

Dozens of police and army vehicles entered the town at daybreak but met resistance from gunmen.

It was the second operation this week to restore control over areas where Islamist sympathies run deep and hostility to the authorities has grown since the army overthrew the Islamist President on 3 July.

Eleven police officers were killed in an attack on Kerdasa'smain police station on 14 August.

The building was hit with rocket-propelled grenades and torched after police had stormed pro-Mursi protest camps in Cairo that day and killed hundreds of his supporters.

There had been little or no sign of state authority in Kerdasa since then.

"The security forces will not retreat until Kerdasa is cleansed of all terrorist and criminal nests," Interior Ministryspokesman Hany Abdel Latif told state media at the start of the operation.

Dozens of weapons, including rocket-propelled grenades, had been seized, security sources said.

At the start of the raid, security forces in body armour and armed with automatic rifles fanned out in the town.

Army checkpoints were set up at its entrances and militants set fire to tyres to obstruct the operation.

Heavy gunfire was heard in a village near Kerdasa as police chased a group of men into side streets, television footage showed.

State television showed around a dozen residents dragging a man towards an army checkpoint, yelling "We caught one".

After handing him over to soldiers, they chanted "the army and the people are one hand".

They said he had been caught in a car with weapons.

Militant attacks have been on the rise since the over throw of Mr Mursi, Egypt's first freely-elected president.

The army-installed authorities have launched a crackdown, saying they are in a new war on terror against the Islamists.

State media have labelled the Muslim Brotherhood, the group that propelled Mr Mursi to power last year, as an enemy of the state.

In a similar operation earlier this week, the security forces moved into the town of Delga in the southern province of Minya - another area known for Islamist sympathies and a major theatre for an insurrection waged by Islamists in the 1990s.

The army is also mounting an operation in the Sinai Peninsula against al-Qaeda-inspired groups.

Shootings and bomb attacks have also taken place in the Nile Valley - two members of the armed forces were shot dead in the Nile Delta on Tuesday. 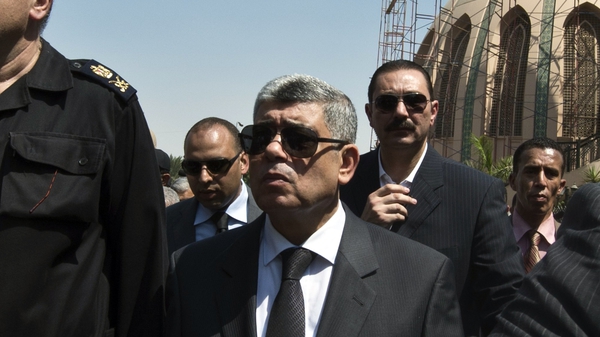 Dozens killed and injured in North Sinai attacks in Egypt