The Organisation for Economic Co-operation and Development has said the Government must do more to tackle youth unemployment and the growing problem of long-term joblessness.

In a biennial survey, the Paris-based organisation says the risk of a lost generation calls for decisive intervention in the youth labour market.

It says because of high and persistent rates of youth unemployment, activation policies are "paramount".

At 30%, Ireland has the highest share of young people on income support in the EU.

Today it is more than three times the OECD average.

The OECD says that Ireland spends a significant amount of money on labour market policies by international standards, but says most of the money goes on passive policies - such as income support - rather than active policies that try to get people into or back into the labour market.

Although Ireland has increased the number of active labour policies since the start of the recession, they remain low by international standards. It says active labour schemes for young people should be prioritised to the detriment of passive schemes.

The report also recommends much more intrusive monitoring and follow-up of welfare claimants, especially young people. "It will be increasingly important to ensure that income support is subject to stricter and rigorous mutual obligation regimes".

It recommends the Dutch model, under which any person aged 18 to 27 seeking social welfare benefits must be offered either work or training or a combination of the two.

"Young people cannot remain inactive, and must accept an offer in order to get social benefits". It says such an approach keeps social exclusion and marginalisation at bay.

It says international studies suggest job search assistance is the most useful policy for helping the young unemployed back to work, with training programmes providing a good medium term solution.

It says young people need more intensive counselling and job search assistance than older unemployed people - because they have less work experience and fewer contacts for seeking work - but points out that case workers in Irish benefits offices have to oversee 800 people each, which the OECD describes as high by international standards.

It calls for more case workers to be deployed to frontline employment offices as a matter of urgency.

The report says the Pathways to Work policy, introduced in February 2012, is in line with previous OECD advice on active labour market policies, but says it needs a more active job search monitoring component, similar to those in the UK or Australia, where there is a minimum reporting requirement every two weeks.

The OECD is highly critical of Ireland’s main direct active labour market programme, Community Employment, which accounts for more than half of the spending on active labour policies in Ireland.

It says Community Employment fails to return participants to the main labour market, and should be limited to the most socially disadvantaged participants, with little realistic prospects in the open jobs market.

It should be treated as welfare support not labour market activation by Government, according to the body. Money saved should be put into other more effective schemes that are specifically targeted at youth.

It analyses the second biggest spending programme (23% of spend) - the Back to Education Allowance (BTEA) - and says it lacks any linkage to the needs of the employment market.

It is critical of the fact that claimants can select any course of study and receive welfare payments. It recommends that employment offices should have the decisive say in which courses of study are eligible for this funding, in order to better match the profile of the applicant with skills needed in the labour market.

This echoes recommendations made by the Department of Social Welfare last year.

A fourth programme - support for self employment - is criticised because it is open to all and is not specifically geared to the needs of young people, who require higher levels of intervention and monitoring.

It says that while there are many supports for entrepreneurs in Ireland, there are no specific programmes for young entrepreneurs. It also recommends entrepreneurship should be promoted in primary and secondary schools.

It says apprenticeship costs in Ireland are high by international standards, and recommends business, especially SMEs in syllabus design, as they are closer to the needs of the jobs market.

It notes that in Ireland people who have competed vocational training have the second lowest rate of employment in the OECD.

Unlike most OECD countries, Irish people with only a general education qualification have a higher employment rate than those with vocational training.

In wider criticism of the welfare and labour market system it notes that Ireland has the highest proportion of jobless households in the European Union, and had the second highest proportion before the onset of the recession, indicating a deep seated problem.

It says the tax and welfare system need "granular analysis" to minimise disincentives to work.

Minister for Social Protection Joan Burton has accepted that there is an unacceptably high level of youth unemployment in Ireland.

However, speaking on RTÉ's Six One News, Minister Burton said her department did not have the budget to increase staffing levels in unemployment services.

She said she agreed with the OECD that the rate of unemployment is falling significantly but not as much as she and the agency would like.

Ms Burton said the OECD has acknowledged that more young people are staying on longer in third level education.

She said she is currently working on a youth guarantee, and said that 60% of people on Jobbridge go on to get employment. 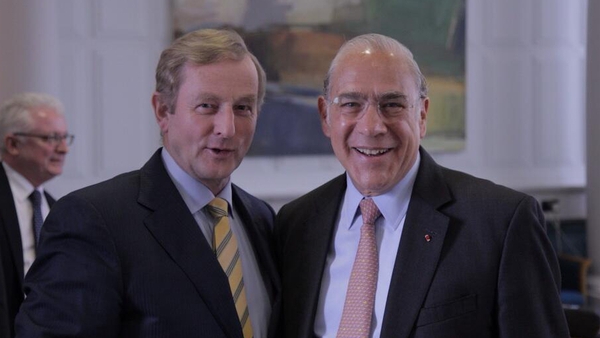