More than £15m (€17.8m) has been spent since April on policing parades, protests and associated disorder in Northern Ireland.

The PSNI has said 689 officers have been injured since July last year, and 18 remain on sick leave.

A troubled marching season last summer was followed by loyalist protests against a Belfast City Council decision to restrict the flying of the Union flag from the city hall.

This summer, fresh violence occurred following restrictions placed on a loyal order parade through north Belfast and after a march through east Belfast.

Days of rioting took place, the Sinn Féin lord mayor of Belfast was attacked by an angry crowd and there are still protests in north Belfast.

PSNI Chief Constable Matt Baggott told the Policing Board, which scrutinises the police, of real long-term pressures on the PSNI, with the trouble taking officers away from normal duties.

He added that policing numbers, which have been reduced following the end of IRA and loyalist violence in the 1990s, should not fall below 7,000.

PSNI Assistant Chief Constable Will Kerr said: "The journey between normality and crisis in Northern Ireland is only about 24 hours because there is an inherent unpredictability of very large numbers of people at an interface and we need a solution to come very quickly."

US diplomat Richard Haass is to chair all-party talks this month aimed at addressing issues about dealing with the parades and protests. 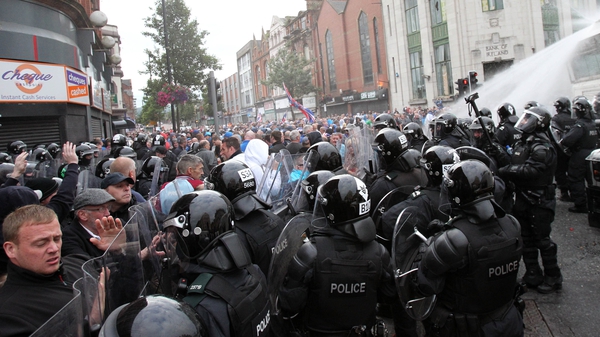