The head of the Egyptian army has called on citizens to protest on Friday to give the army permission to take action against "terrorism and violence".

At least one supporter of Egypt's deposed president Mohammed Mursi was killed in Cairo during a protest march, a security source and the Muslim Brotherhood said.

The Muslim Brotherhood said on its website that police in civilian clothes had opened fire using live ammunition on marching supporters, killing two and injuring others.

A security source confirmed one supporter of Mr Mursi was killed.

The Muslim Brotherhood has accused the Ministry of Interior of using thugs in plain clothes to attack protesters, but security officials have denied this accusation.

In a separate incident, a bomb exploded at a police station in a province north of Cairo early today, killing one person and wounding 17 others.

Unknown assailants threw the bomb from a passing car in Mansoura, the capital of Dakhalia province, two security sources said.

Nine people were killed in Cairo yesterday in clashes between opponents and Islamist supporters of Mr Mursi, who was toppled by the army earlier this month.

Gen Sisi called for protests on Friday and vowed there can be no retreat on the roadmap for political transition. 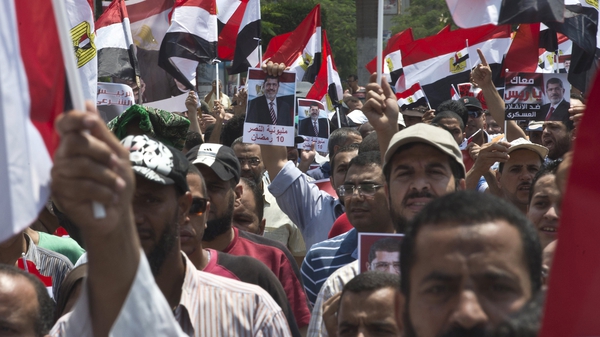