A firearm has been found by gardaí investigating the shooting of a 27-year-old man in Dublin.

Michael Kelly from St Teresa's Gardens was a father of three young children.

Mr Kelly is believed to have been shot at around 10.30am at the junction of Suir Road and Davitt Road.

The person who carried out the shooting made their getaway in a car, which was found burnt-out in an estate close by in Rialto Court.

Gardaí have confirmed a firearm was found in the vehicle and detectives believe the killing was drugs related.

The gunman is described as 5'10"-6' and wearing a blue hoodie with white shoulders.

The shooting took place on open ground on a popular walking route. The body was discovered by two women who were out walking at the time.

Emergency services were called, but Mr Kelly was pronounced dead at the scene.

The victim, who was known to gardaí for minor drug offences, is believed to have been shot once.

The Luas passes beside where the shooting took place and gardaí are appealing to anyone who was on the tram between 10am and 11am who may have seen something to come forward.

The incident happened between the Fatima and Suir Road stops.

Gardaí are also looking for witnesses who may have seen the car at Rialto Court.

The vehicle is described as a metallic grey/lilac four-door Opel Astra, registration 99 LH 5711. 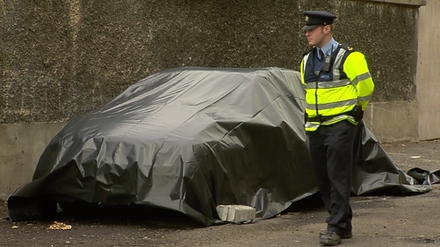 Anyone with information related to the shooting is asked to contact the incident room at Kilmainham Garda Station on 01-6669700, the Garda Confidential Line 1800666111 or any garda station.