More than 10,000 protesters have rallied outside Greece's public broadcasting headquarters in Athens in support of staff who were fired earlier this week.

Former workers at Hellenic Broadcasting Corp, or ERT have occupied the building to continue broadcasts in defiance of the government.

Greece's two largest unions have staged a general strike against the broadcaster's closure.

The protest disrupted public transport and left state hospitals running on skeleton staff, while flights were grounded for two hours.

Rallies were held around Greece, including Thessaloniki, the country's second largest city, where 7,500 gathered, according to police estimates.

The move to close the broadcaster has divided the fragile coalition government.

It has also raised the possibility of early elections that could endanger the country's bailout programme.

Conservative Prime Minister Antonis Samaras has called a meeting next week with centre-left coalition partners who are demanding that ERT be reopened.

"We are totally against seeing television screens going dark and we side with the overwhelming majority of the Greek people," Evangelos Venizelos, leader of the Socialist Pasok party and coalition partner, told parliament.

"The country does not need an election, but Pasok does not fear elections ... To think it does would be a major mistake."

The government pulled ERT off the air late Tuesday, axing all 2,656 jobs as part of its cost-cutting drive demanded by international creditors.

Bailout lenders have provided about €200bn in emergency funding to Greece since 2010.

Mr Samaras insisted the broadcaster will remain closed before a new public broadcaster opens at the end of the summer.

But Pasok and Democratic Left, the other junior partner, submitted legislation to parliament to cancel ERT's closure.

The conservative party, which holds most of the government posts, defended the decision to shut down the broadcaster.

"There have been more strikes at ERT in recent months that anywhere else ... They are acting in a socially irresponsible way," conservative lawmaker Adonis Georgiadis said.

"We are not ending public television. We are making it better."

The crisis is the worst in Mr Samaras' year-old government, which is credited with rescuing Greece's euro membership by imposing harsh austerity and reform measures demanded by the country's international creditors.

Cooperation between Mr Samaras' conservatives and his partners has come under increased strain this year as unemployment continues to worsen.

Unemployment swelled to 27.4% in the first quarter of the year, the state statistics agency reported today. 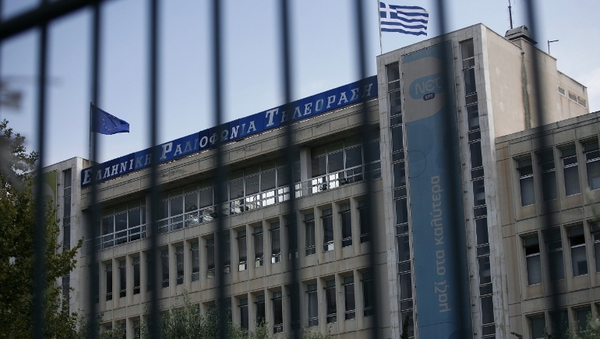 Greece back in crisis mode on state TV shutdown, downgrade