Amnesty International says that tough economic conditions and austerity in the EU are stoking hostility towards immigrants fleeing wars and poverty.

In its annual global report the human rights group also accuses Greece and Italy in particular of harsh treatment of refugees, including those fleeing the Syrian civil war.

The report is critical too of international inaction over Syria, accusing Russia and China of using national sovereignty as a shield for non-intervention.

Greece is criticised for laws allowing migrants to be detained by police for up to 18 months if suspected of carrying infectious diseases.

Amnesty General Secretary Salil Shetty described as “disgraceful” the treatment of immigrants by Italy and Greece.

"Certainly you could argue that austerity measures and economic crises have led to scapegoating of asylum seekers and people seeking a better life," he added.

Amnesty says that Syrian refugees have been held in poor conditions in Greek police stations and left without shelter.

Italy is criticised for violating international human rights obligations to not return people to countries where they could be at risk of abuses, and sending back African migrants and asylum-seekers out to sea.

In September, the Council of Europe Commissioner for Human Rights said human rights abuses could arise from Italy’s repatriation agreements with countries such as Libya, Egypt and Tunisia.

Last year, Greece introduced legislation to allow detention of "irregular migrants and asylum-seekers on grounds such as suspicion of carrying infectious diseases such as HIV," the report said. Police were also granted powers to extend the period of detention without charge of asylum-seekers.

Russia and China have cast a veto three times at the UN Security Council in the last two years to prevent deeper involvement in the war, which the UN says has killed at least 70,000 people.

"The UN Security Council must consistently stand up to abuses that destroy lives and force people to flee their homes," Mr Shetty said in the Amnesty report.

"That means rejecting worn-out and morally bereft doctrines that mass murder, torture and starvation are no one else's business," he added.

Amnesty blamed both the rebels and the Syrian government for atrocities during the war, including extrajudicial killings and torture, though the report said the abuses by the rebels were "on a smaller scale".

The United States has threatened to increase support for Syria's rebels if President Bashar al-Assad refuses to discuss a political end to a civil war now spreading across borders.

Rebels called for reinforcements to combat an "invasion" by Hezbollah and its Iranian backers.

Pro-Assad forces have launched an offensive against the strategic town of Qusair that could prove to be a turning point in the war, bringing the worst fighting in months.

Speaking before a meeting in Jordan of the "Friends of Syria" group - made up of Western and regional countries opposed to the Assad regime - US Secretary of State John Kerry threatened more rebel support.

"In the event that the Assad regime is unwilling to negotiate ... in good faith, we will also talk about our continued support and growing support for the opposition in order to permit them to continue to be able to fight for the freedom of their country,” Mr Kerry told reporters.

The US and Russia are scrambling to revive diplomacy and peace efforts, alarmed by new reports of atrocities on both sides, suspicions that chemical weapons have been used and the rise of al-Qaeda-linked fighters among rebel forces.

Both have called for an international conference, expected to take place in Geneva in the coming weeks.

The US-Russian proposal for a peace conference has raised suspicion among Arab countries that Washington is watering down support for President Assad's opponents, who had long refused to negotiate unless the Syrian leader is excluded from any future settlement.

The US and EU have so far shied away from directly arming the rebels, but have given them "non-lethal" support.

Arab backers like Qatar and Saudi Arabia have been sending them weapons. As Russia and Iran supply the Assad regime, Western countries have been balancing their opposition to the president with a worry that arms for rebels may reach al-Qaeda-allied Islamists.

Moscow says talks must include the Assad government and Iran. Russian Foreign Minister Sergei Lavrov praised the Syrian government's response to the US-Russian proposal, while saying the opposition was too divided to agree on its participation.

Syrian Deputy Foreign Minister Faisal Mekdad said Assad’s government would decide soon whether to attend the talks. The opposition is expected to discuss its stance at a meeting in Istanbul. 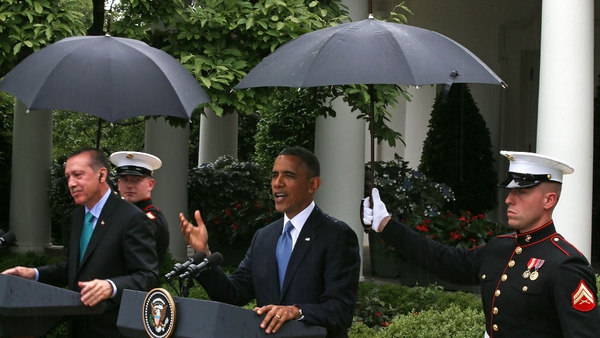