The Oireachtas Health Committee hearings on the Protection of Life During Pregnancy Bill have ended.

In his closing submission, Minister for State at the Department of Health Alex White assured committee members that each issue raised over the past three days would be examined from a policy perspective.

The majority of members said the hearings were very beneficial.

However, Senator Jim Walsh said at times the hearings were "a bit rushed".

Senator Jillian Van Turnhout gave an emotional closing statement saying she found the association of abortion with the holocaust showed "woeful" disrespect to victims of the holocaust.

Senator Imelda Henry said while men "play their part" in pregnancy, the last three days were about women and she added that there were times that she found it "offensive" in the Seanad Chamber.

She said she had to think a lot about the issue of suicide but made her decision by thinking about if "anything happened to her own".

She called for clarity and for the legislation to be enacted before the summer recess.

The committee earlier heard that the Government is under no legal obligation to legislate for the X Case.

Barrister Paul Brady said it might be desirable, but the Government did not have to legislate just because the Supreme Court said it should, a view later echoed by Professor William Binchy of Trinity College Dublin.

Mr Brady said committee members should not feel obligated to legislate for suicide because this aspect was a concession in the X Case judgment and not a formal decision.

It was unfortunate, he said, that legislators should feel straitjacketed to provide for something that was a concession.

Legal experts are giving submissions to the committee on the third and final day of hearings on the Heads of the Protection of Life during Pregnancy Bill 2013.

The committee will report to Minister for Health James Reilly before the Bill comes before the Dáil and the Seanad next month.

Barrister Dr Simon Mills told members the absence of scientific evidence surrounding suicidal ideation and the risk of self harm in pregnancy should not be used to deny the women involved the protection they need.

Dr Mills also raised concerns about Head 19, making it an offence for anyone to perform any act with the intent to destroy unborn human life. He said this was too broad.

She said if you look at the X Case ruling, in a situation where a woman without mental illness but who is suicidal as a result of her pregnancy, it may be the continuation of the life of the baby and not the termination of the pregnancy that is the problem for her.

There was no evidence given at the hearings that abortion is effective in dealing with suicidal ideation, she said, adding that the Bill proposes a treatment which is experimental.

Mrs Justice Catherine McGuinness challenged Prof Binchy's argument that there are a range of "options" legislating for the X Case.

She said the comments came "out of the mouth that is trying to reduce options".

Mrs Justice McGuinness said the X Case is "the law of the land" and the Government "is constitutionally constrained to bring forward this law".

Elsewhere, Fianna Fáil Finance spokesperson Michael McGrath has called for a free vote on the Bill.

Mr McGrath said he believed it would be very difficult for the party to reach a consensus on the issue.

Imposing the whip would cause fundamental difficulties for members of the parliamentary party, he added.

The Fianna Fáil parliamentary party is deeply split on the issue.

Party leader Micheál Martin has said the party should take a fixed position on the issue. 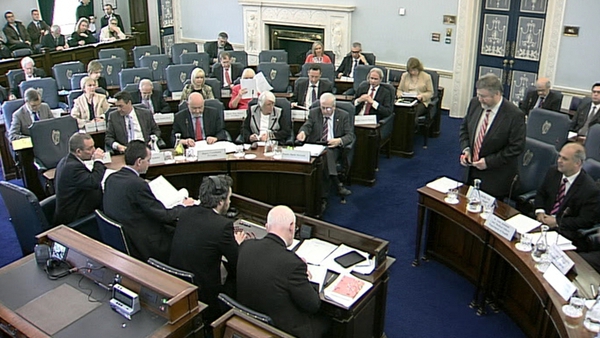