The Association of Judges of Ireland has issued a statement in support of Mr Justice Peter Kelly's comments on judicial independence.

It has said all structures for communication between the Government and the judiciary have ceased.

Supreme Court Judge Justice Adrian Hardiman also said it would be unwise not to be aware that Justice Kelly, as president of the association of judges, speaks for judges and is in a position to do so.

He made his comments at the launch of the law reform commissions report into the jury system.

Earlier today, Minister for Justice Alan Shatter said any suggestion that there was political interference in Ireland's judicial system would do great damage to its international reputation.

According to the statement published on the AJI website, the report on Justice Kelly’s comments at a private dinner hosted for business leaders last week was broadly accurate but contained a number of inaccuracies.

The AJI says Mr Justice Kelly pointed out that for almost 90 years of this State's existence there had been no need for an association of judges given the mutual respect demonstrated by the executive and judicial branches of government, one for the other.

"All structures, both formal and informal, which existed for communication between these two branches of government have ceased," the AJI said.

It said judges accepted at all stages they had to bear their fair share of salary cuts.

However, as the Constitutional guarantee concerning judicial remuneration was removed, they asked that an independent body be established to fix such remuneration so as to ensure judicial independence.

"This request was dismissed out of hand", the AJI said in the statement.

It said subsequently legislation was passed in respect of pension provisions of new judges without notice or consultation.

"Those provisions extended by one third the length of time senior court judges have to serve to obtain a pension which was unlikely to amount to half the final salary."

That had "major consequences" for judicial recruitment in the future, the statement said.

The AJI also said the personal insolvency act was enacted without any notice or debate concerning insolvency judges to be initially recruited solely from the ranks of county registrars.

It said no wording concerning those has been forthcoming though they all have huge implications for the judiciary. It said the AJI accepts the need for a court of appeal but is concerned at the form of amendment to the constitution which may be proposed.

It also said the association had no information about the proposal concerning specialist family courts.

It said the abolition of the Seanad renders the removal of judges subject only to a majority-only resolution in the Dáil, while at present a resolution of both houses is required.

"All of these matters have implications for judicial independence," the statement read.

In an interview earlier today, Mr Shatter said he did not believe that Mr Justice Kelly intended to imply anything other than all his colleagues in the country's courts independently and properly determine cases.

He said: "I do believe it is unfortunate if Constitutionally sanctioned pay reductions that have affected the judiciary were presented as an attack on judicial independence because we had a referendum on the issue.

"The overwhelming majority of people were of the view that whilst judges undertake vitally important and onerous duties, this shouldn't render the judiciary immune from the consequences of the State's enormous fiscal difficulties."

Mr Shatter said it was important to be clear that there was no political interference in Irish courts.

The minister also said the Government would never do anything to undermine the independence of the judiciary.

Minister for Communications Pat Rabbitte has said there is no intention on the part of anybody in Government to transgress the Constitutional principle of the separation of powers.

Mr Rabbitte said the advice the Government had in respect of judges' pay was that it was necessary to have a Constitutional referendum.

He said the move to reduce judges' pay was no more than a fiscal and financial measure, because of the economic crisis. 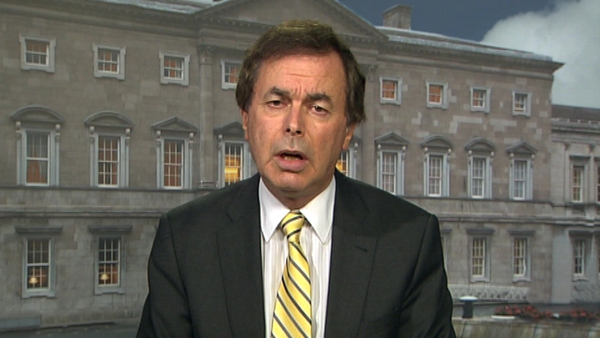 Shatter hits back at judge's comments