Israel launched air strikes on Gaza last night, the first such attacks since an eight-day war in November.

Hamas, the Palestinian Islamist movement that controls the territory, and Israel's military confirmed the attacks.

"Occupation planes bombarded an open area in northern Gaza, there were no wounded," a statement from the Hamas Interior Ministry said.

The strikes threatened to end an Egyptian-mediated ceasefire between Israel and Hamas.

The truce has kept the frontier relatively quiet since November, when 170 Palestinians and six Israelis were killed in a brief cross-border war.

A statement from Israel's military said Israeli aircraft targeted "two extensive terror sites in the Northern Gaza Strip" in response to rockets fired from the Palestinian enclave at Israel.

Two landed in Gaza and one hit an open area in southern Israel, causing no damage or injuries.

Israel launched its November 2012 offensive with the declared aim of ending Palestinian rocket fire into its territory.

Yesterday was the third time since the November truce that rockets from Gaza have hit Israel. There have been no casualties in the attacks.

Magles Shoura al-Mujahedeen, a hardline Islamist Salafi faction with a small presence in Gaza and Sinai in neighbouring Egypt, said in an online statement that it fired the rockets in response to the death of a Palestinian inmate in an Israeli jail.

Maysara Abu Hamdeya, 64, was serving a life sentence over an attempt to bomb an Israeli cafe and he died of cancer yesterday.

His death sparked some clashes in an Israeli prison, in East Jerusalem and in the occupied West Bank.

Last month projectiles landed in the southern Israeli town of Sderot during US President Barack Obama's visit to Israel and the West Bank.

Israel said it holds Hamas responsible for any violence emanating from Gaza.

Hamas has at times cracked down on the Salafis, seeing them as a threat to the stability of Gaza.

Along with the United States and most Western governments, Israel views Hamas as a terrorist group for its refusal to recognise the Jewish state or to renounce violence that included suicide bombings in a Palestinian uprising a decade ago.

Palestinians want to establish a state in the enclave along with the West Bank and East Jerusalem, territories Israel captured in the 1967 Arab-Israeli War. 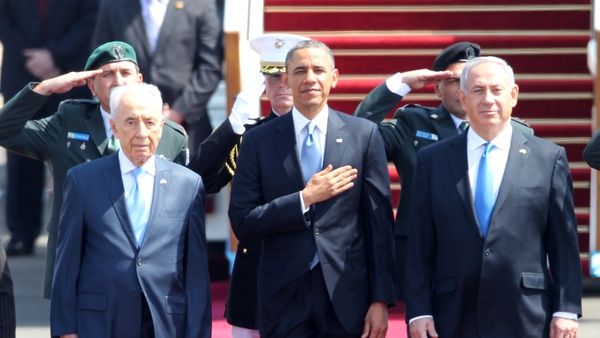