Cardinal Seán Brady has said he believes that Pope Francis will continue the policy of Pope Benedict and Pope John Paul to address clerical child sex abuse in Ireland.

He said that policy was to face the facts of what happened, take care of the victims, ensure that it does not happen again and do justice to all.

Cardinal Brady said that Pope Francis would be invited to Ireland.

Last night thousands of people gathered in St Peter's Square to witness the announcement of the new Pope.

This morning, Pope Francis quietly left the Vatican to pray for guidance at a Rome basilica.

The pope went to the Basilica of Santa Maria Maggiore, the oldest church in the world dedicated to the Madonna, where he prayed before a famous icon of the Madonna called the Salus Populi Romani, or Protectress of the Roman People.

"He spoke to us cordially like a father," said Fr Ludovico Melo, a priest who prayed with the Pope.

"We were given ten minutes' advance notice that the pope was coming."

The first South American pontiff and the first non-European pope in 1,300 years, Pope Francis is also bishop of Rome.

In his first words on Wednesday night he made clear that he would take that part of his role seriously and made good on the promise by visiting one of the capital's most important churches.

Later today, he is due to go to the papal summer retreat at Castel Gandolfo, south of Rome, to meet Emeritus Pope Benedict.

A spokesman said he had also travelled to the church-owned residence he has been in for most of his visit to Rome, collected his bags, paid his bill and thanked the staff before returning to the papal apartments.

A Vatican spokesman also clarified that the pope chose the name Francis after Francis of Assisi rather than St Francis Xavier, the renowned Jesuit missionary.

Earlier, it was announced that Pope Francis' inaugural mass will be celebrated next Tuesday in the Vatican.

His inauguration on the Feast of Saint Joseph is expected to attract religious and civic leaders from around the world, including President Michael D Higgins.

Minister for Finance Michael Noonan will represent the Government at the ceremony.

A Government spokesman said Minister Noonan would be accompanying the President because Taoiseach Enda Kenny had a long-standing arrangement to visit the United States over the coming week.

A leading Peruvian cleric, Monsignor Miguel Irizarto, remarked that the Argentine Pope's election showed that old patterns have been reversed and the Americas, Africa and Asia must now teach Christianity to Europe.

Fr Tony Flannery, the silenced founding member of the Association of Catholic Priests in Ireland, hailed the election of what he called "a total outsider" from the developing world.

In a message to the new Pope last night, President Higgins said his election would bring great joy to the people of Argentina, as well as to the Jesuit community across the world.

Offering his congratulations, the Taoiseach said Pope Francis had the best wishes of all Irish people, of all traditions.

Argentina's President Christina Fernandez de Kirchner wished her fellow countryman a "fruitful pastoral mission" and expressed the hope that he will work toward justice, equality and peace for all.

US President Barack Obama offered warm wishes to the Pope and said the selection speaks to the strength and vitality of the Americas.

German Chancellor Angela Merkel said the hopes of "millions of believers in Germany and the world, now rest with the new Pope", while EU President Herman Van Rompuy and European Commission head José Manuel Barroso urged the pontiff to try to bring the world's people and religions closer together.

Bergoglio is the first Jesuit to become pope

Cardinal Bergoglio was born into a family of seven, his father an Italian immigrant railway worker and his mother a housewife.

He became a priest at 32, nearly a decade after losing a lung due to respiratory illness and quitting his chemistry studies.

Despite his late start, he was leading the local Jesuit community within four years.

Cardinal Bergoglio has a reputation as someone willing to challenge powerful interests and has had a sometimes difficult relationship with Ms Fernandez and her late husband and predecessor, Nestor Kirchner.

Displaying his conservative orthodoxy, he has spoken out strongly against gay marriage, denouncing it in 2010 as "an attempt to destroy God's plan," and is expected to pursue the uncompromising moral teachings of Benedict XVI and John Paul II.

Cardinal Bergoglio is the first Jesuit to become pope. The order was founded in the 16th Century to serve the papacy and is best known for its work in education and for the intellectual prowess of its members.

At a dinner after his election Pope Francis said: "May God forgive you," raising loud laughter from the cardinals, according to New York Cardinal Timothy Dolan.

He said: "Bergoglio, as he was then, would have been seen as certainly theologically conservative, somewhat cautious, but then I think, especially as Archbishop of Buenos Aires, surprised a lot of people by becoming very outspoken on social justice issues."

Fr O'Higgins said he had "a huge amount of contact with the poorest of the poor. He'd have public masses, for example, in Buenos Aires, often spontaneously, within a public square for beggars, prostitutes in the streets".

A peak audience of 992,000 people watched RTÉ’s Six One News last night as the historical events in Rome unfolded live.

An average of over 723,000 people watched the entire programme, with an audience share of 52%.

The peak audience figure is the highest for a news programme since the State of the Nation speech by Taoiseach Enda Kenny in December 2011. 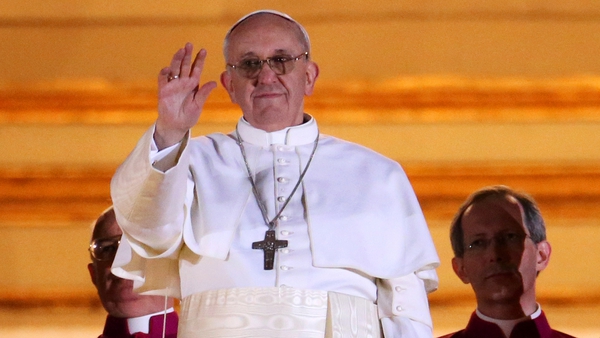