Pope Benedict XVI has bid an emotional farewell at his last general audience, saying he understands the gravity of his decision but is retiring for the good of the Roman Catholic Church.

Up to 150,000 people gathered in St Peter's Square this morning, the day before Benedict becomes the first pontiff in some six centuries to step down.

Pope Benedict said his crisis-hit papacy had included moments of joy but also difficulty when "it seemed like the Lord was sleeping".

The Pontiff sat on an ivory coloured throne on the steps of St Peter's Basilica and was frequently interrupted by applause from the crowd.

"There were moments when the waters were choppy and there were headwinds," he said.

He said he was not "coming down from the cross" despite renouncing his office, but would remain in the service of the Church through prayer.

Pope Benedict asked the faithful to pray for the cardinals and whoever they chose as his successor.

When he finished his speech the crowd, including many cardinals, stood to clap.

Today's general audience, which usually takes place in an indoor auditorium, was moved outside into the sprawling square to accommodate more people.

Many people in the crowd, from Italy and abroad, held up banners thanking the Pope and wishing him well.

Despite the praise and sympathy for the Pope, many Catholics in the square were stunned by his decision and worry about the effect it will have on the future of a troubled Church.

The Vatican has said that Pope Benedict will assume the title of "pope emeritus" and be addressed as "your holiness".

He will move to the papal summer residence south of Rome tomorrow night.

No strength to continue in office

The 85-year-old pontiff said he is stepping down because he does not have the strength to continue in office due to his advanced age.

Given the rarity of the occasion, Vatican officials have held discussions about what he will be called and how he will dress.

He will wear a "simple white cassock" and will lay aside the red "shoes of the fisherman" that have been part of his papal attire.

In retirement, he will wear brown loafers given to him by shoemakers during a trip to Mexico last year.

Pope Benedict's lead seal and his ring of office, known as the "ring of the fisherman", will be destroyed according to Church rules, just as if he had died.

The Vatican said yesterday that the Pope was sifting through documents to see which will remain in the Vatican and go into the archives of his papacy and which "are of a personal nature and he will take to his new residence".

Tomorrow, he will greet cardinals in Rome, many of whom have come to take part in the conclave to elect his successor.

He will then fly by helicopter to the papal summer retreat at Castel Gandolfo, a 15-minute journey south of Rome.

There he will make an appearance from the window of the papal villa to greet residents and well-wishers expected to gather in the small square.

That will be Pope Benedict's last public appearance.

Tomorrow night, the Swiss Guards who stand as sentries at the residence will march off in a sign that the papacy is vacant.

Pope Benedict will move into a convent in the Vatican in April, after it has been restored.

On Friday, cardinals in Rome will begin meetings known as "general congregations" to prepare for the secret conclave that will elect a new pope.

This week Benedict changed church rules so that cardinals could begin the conclave earlier than the 15 days after the papacy becomes vacant prescribed by the previous law.

The change means that the cardinals, in their pre-conclave meetings, can themselves decide when to start.

The Vatican appears to be aiming to have a new pope elected by mid-March and installed before Palm Sunday on 24 March so he can preside at Holy Week services leading to Easter.

Cardinals have begun informal consultations by phone and email in the past two weeks since Benedict said he was quitting. 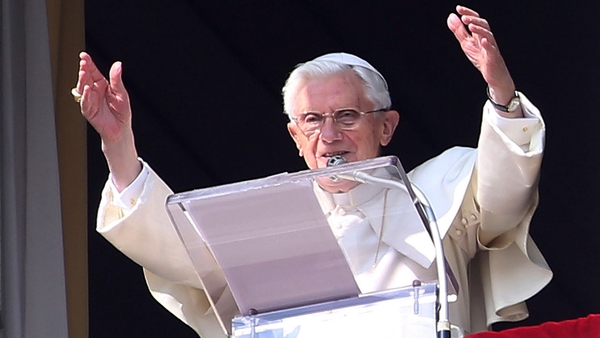