The Government has pledged €500,000 in emergency aid to help civilians affected by the ongoing crisis in Syria.

Tánaiste and Minister for Foreign Affairs Eamon Gilmore said the funds will be made available to the Red Cross and United Nations agencies operating in Syria.

He underlined the importance of securing immediate and unhindered access for all humanitarian agencies.

Mr Gilmore also echoed warnings made by the UN regarding the dangers associated with any possible militarisation of emergency assistance.

The UN estimates that 7,500 people have died as a result of President Bashar al-Assad's efforts to crush a year-old uprising in Syria.

Baba Amr has been scene of some of the heaviest clashes between rebel and government forces.

The International Committee of the Red Cross and the Syrian Arab Red Crescent are still seeking approval from Syrian authorities to enter Baba Amr to help civilians there.

Teams from the two agencies did distribute food and blankets to civilians in two other neighbourhoods of Homs this morning.

An ICRC convoy carrying food for "several thousand people" and other relief supplies has also arrived in Homs from Damascus.

Opposition activists have accused Syrian forces of carrying out bloody reprisals in Baba Amr, but their reports are hard to verify given Syria's severe curbs on independent media.

McCain calls for US air strikes on Syrian forces

US Senator John McCain has called for US air strikes on Syrian forces to protect population centres and create safe havens for opponents of the regime.

"To be clear: This will require the United States to suppress enemy air defences in at least part of the country," Mr McCain said in remarks on the floor of the Senate.

Mr McCain argued it would be a "strategic and moral defeat" for the US if President Assad succeeds in clinging to power and said military action was needed to drive a negotiated transition.

"What opposition groups in Syria need most urgently is relief from Assad's tank and artillery sieges in the many cities that are still contested," he said.

"Providing military assistance to the Free Syrian Army and other opposition groups is necessary, but at this late hour, that alone will not be sufficient to stop the slaughter and save innocent lives.

"The only realistic way to do so is with foreign air power," he said.

UN humanitarian affairs chief Valerie Amos has said that the Syrian government has agreed to allow her to visit the country later this week.

Syria's decision to allow Ms Amos into the country comes after intensifying international criticism, including a rare rebuke of Damascus by the UN Security Council last week for failing to grant her access to Syrian conflict zones.

"As requested by the Secretary-General (Ban Ki-moon), my aim is to urge all parties to allow unhindered access for humanitarian relief workers so that they can evacuate the wounded and deliver essential supplies," she said.

Ms Amos said she plans to be in Syria from Wednesday to Friday.

Human Rights Watch quoted "local sources" on Friday as saying about 700 civilians had been killed and thousands wounded since 3 February. 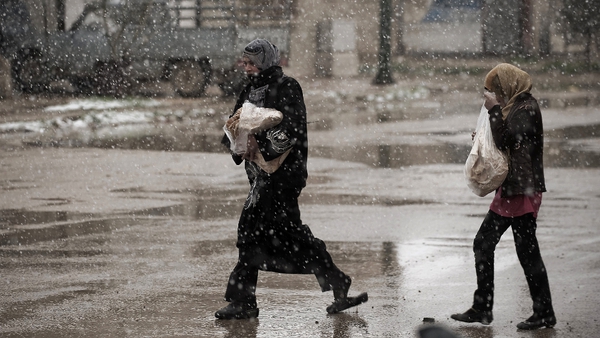