Turkmen President Gurbanguly Berdymukhamedov has secured five more years as leader of the Central Asian state by winning 97% of votes in an election shunned by OSCE observers for a lack of competition.

Mr Berdymukhamedov, 54, faced seven token candidates who held no ambition of dislodging the trained dentist as president of a country holding 4% of global gas reserves.

At polling stations yesterday, performers in national dress danced and sang eulogies to their president, whose word is final in a desert country of 5.5m people that borders Iran and Afghanistan.

His subjects call him Arkadag - the Patron.

The Organisation for Security and Cooperation in Europe (OSCE) declined to send observers after concluding that its presence would not "add value", given limited freedoms and the lack of political competition.

Mr Berdymukhamedov's margin of victory exceeded the 89% he polled in the last presidential election in February 2007.

"This speaks of the nation's cohesion," Orazmurad Niyazlyev, chairman of the Central Election Commission, told reporters.

After the 2007 poll, Mr Berdymukhamedov began to disassemble the cult of personality around Saparmurat Niyazov, Turkmenistan's first post-Soviet leader, who died of a heart attack in December 2006.

Though extraordinarily high, Mr Berdymukhamedov's victory margin fell short of the 99.5% scored by Niyazov when he was elected president in 1992.

International energy companies are vying for a share of Turkmenistan's natural gas reserves, the world's joint fourth-largest, as well as oilfields in the Caspian Sea.

Seeking investment and markets for his gas, Mr Berdymukhamedov has taken steps to bring his country out of the isolation of the Niyazov era, engaging foreign governments and avoiding the more eccentric traits of a predecessor who banned opera and ballet.

Though his absolutist tendencies pale next to those of his predecessor, Mr Berdymukhamedov is acquiring his own cult status.

Already prime minister and commander of the armed forces, he was bestowed with the title "Hero of Turkmenistan" last year.

The country's exiled opposition played no part in the election. They say Mr Berdymukhamedov did not follow through on a promise to invite opponents back home to contest the vote.

Amnesty International said it was concerned about suspected torture and ill-treatment in Turkmen prisons, as well as "severe restrictions" on freedom of movement and expression, political activism and faith. 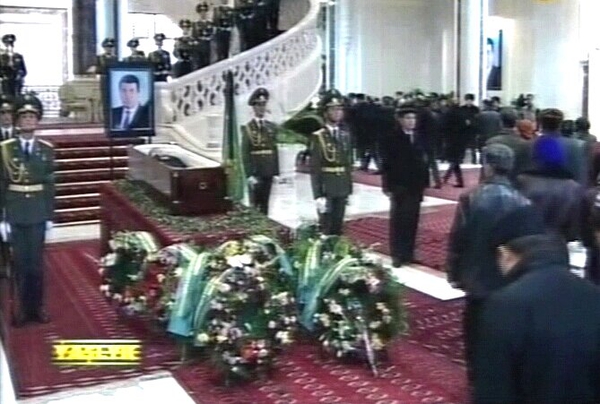 Turkmenistan president is laid to rest