Taoiseach Enda Kenny has dismissed reports that a final draft of the EU treaty on a so-called fiscal stability pact will be concluded by next week.

He said drafts were constantly being written and evolved at a technical and political level.

Negotiators from 26 EU countries are expected to meet next week to discuss a draft of the treaty to set up a so-called fiscal stability union.

The Taoiseach was expected to convey to his fellow heads of government at the 30 January summit the likelihood of whether Ireland will need to hold a referendum in order to ratify the new intergovernmental treaty.

However speaking in the Dáil, Mr Kenny said he could not ask the Attorney General for advice until a final draft was presented.

He said that would not be available until the political process at heads of government level is decided ''on or after the 30th''.

Mr Kenny was responding to Fianna Fáil leader Micheál Martin, who accused the Taoiseach of speaking in riddles.

He said Mr Kenny was ''passive'' on the issue and was refusing to brief the House on developments.

He said the Taoiseach was trying to avoid holding a referendum on the issue, however Mr Kenny said that if a referendum was required it would be held.

In December, eurozone member states and others decided to forge ahead to form a new fiscal stability union which, it is hoped, will reassure markets that current and future eurozone countries will run largely balanced budgets.

However, because of the UK veto, existing EU treaties cannot be changed and instead negotiators have been working on an inter-governmental treaty that will effectively run parallel to existing EU law.

Those negotiations are expected to conclude next week with 26 EU leaders agreeing the treaty text at the 30 January summit.

The new treaty will be signed in March and come into effect at the beginning of next year.

It is understood that only those countries who have ratified the treaty will be able to avail of financial support once the permanent EU rescue mechanism, known as the ESM, comes into effect in July.

Ireland is believed to have been given reassurances that our existing bailout will not be affected by the new treaty and that the Government will be allowed to enshrine a new debt brake in national legislation, rather than in the Constitution, as was originally Germany's preferred option.

Meanwhile Greece today headed into fresh talks with private creditors that could boost the beleaguered eurozone.

The head of Greece's parliament also voiced optimism meanwhile that auditors from bailout partners the EU and International Monetary Fund would welcome reform efforts in the debt-laden nation. 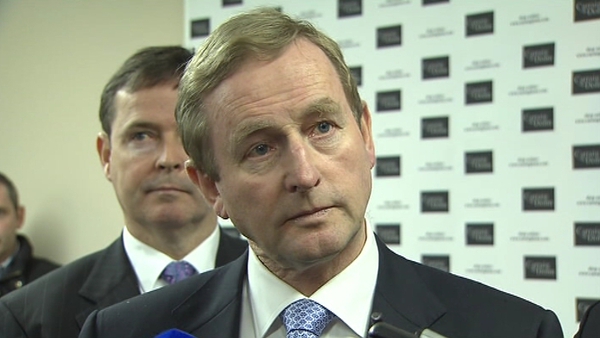 Kenny: No referendum decision before March