Tánaiste Eamon Gilmore has said "saying goodbye" to the Troika "as quickly as possible" and getting "back to the markets" remains the Government's key objective.

Speaking at Stormont Castle today, Mr Gilmore said there is "a single unified Government position" on the issue and all the 'measures being taken are aimed in that direction.

On Minister for Social Protection Joan Burton's interview on radio this morning, Mr Gilmore said she was "very clear" that she supports this objective.

He added that Minister Burton recognised the impact that developments in Europe and the eurozone are having on the efforts of the Irish Government.

Meanwhile, employers' group IBEC and the Construction Industry Federation have held meetings with representatives of the EU/ECB/IMF.

CIF director Tom Parlon said the meetings were to discuss the role the construction industry can play in Ireland's economic recovery, and on the competitiveness of the industry.

He said the construction industry had to operate under the regime of the Registered Employment Agreements, which he claimed resulted in the highest construction wages in Europe being paid here.

He claimed wage levels here were 30-40% higher than comparable rates in Northern Ireland.

He said such wage levels led to the rise of the black economy, resulting in a loss of revenue to the exchequer and a loss of jobs in the legitimate sector.

IBEC Director General Danny McCoy said it was appropriate to review the Croke Park agreement with the Troika.

He said the agreement has produced stability over the past two years and had produced some change, but that the pace of reform was too slow.

He said that as we move into 2012, with a downgrading of growth prospects for the European and Irish economies, it was appropriate to talk about where any possible further budget adjustments would arise, and Croke Park would have to be part of that.

Even without the downgrading of growth prospects, he said it was time to look at the Croke Park agreement again.

A Sinn Féin delegation is also meeting the Troika today.

Ahead of the meeting, its president Gerry Adams said that austerity is not working.

''Every available social and economic indicator confirms this. We want to discuss the details of Sinn Féin's alternatives with the Troika today.'' 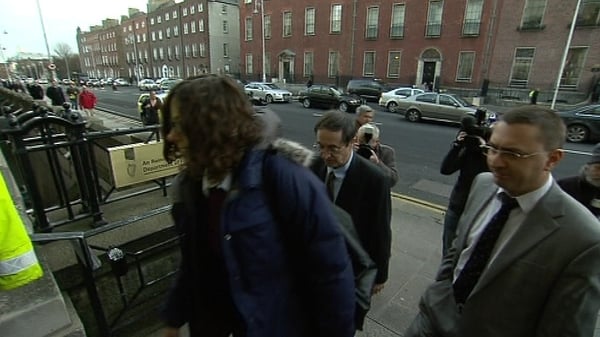