Taoiseach Enda Kenny has told a Reuters event in London that he "absolutely rules out" the view that Ireland will need a second bailout.

Mr Kenny said: "We are in a programme for two years and are meeting the targets and commitments."

He said he wanted to "deliver on my goal to make Ireland the best small country in the world in which to do business, to live, to work, and to grow old".

"If we get through the eurozone crisis politically there are a lot of engines that will drive our economy."

Mr Kenny said that public confidence in Europe and the euro would ultimately be determined by delivery on growth and jobs rather than what he described as institutional wrangling or complex legal or technical negotiations.

European leaders agreed to draft a new treaty to tighten budget controls in the eurozone last month and while this represents significant progress, it is not sufficient on its own, Mr Kenny said.

He said: "Clearly we are not yet at a point where market confidence in the euro has been restored.

"Beyond that, we absolutely must start creating the conditions and environment for a return to economic growth and job creation across the union."

Emerging from half an hour of talks with David Cameron, the Taoiseach said no New Year had ever started with better relations between the two countries.

Mr Kenny said that the British and Irish governments had agreed on a iniative to explore how economic growth could be promoted in Europe, independent of the normal intergovernmental process.

Both Dublin and London would be pursuing a number of ideas in this regard, he said, adding that he shared Mr Cameron's belief in the importance of the Single Market in driving job creation.

The Taoiseach repeated his view that it was essential that the UK remain at the heart of Europe.

He told journalists their discussions had also included the case of murdered Belfast solicitor Pat Finucane, where Britain is resisting calls for a full inquiry.

Mr Kenny acknowledged there was a difference of opinion on the issue.

They had also discussed the position of Justice Minister David Ford in the power sharing executive in Stormont, as well as preparations for sensitive commemorations over the coming years. 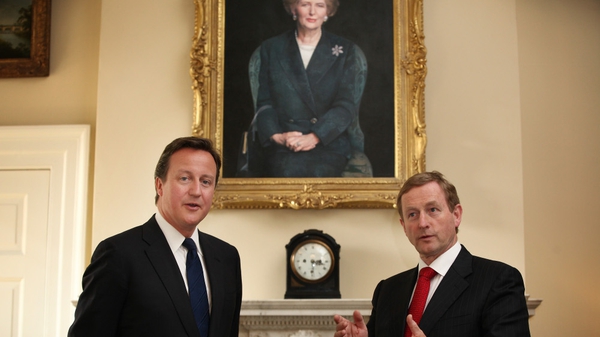 Kenny did not discuss loan rate with Cameron