Lawyers for victims' families in the trial of Hosni Mubarak say Egyptian police were ordered to use lethal fire against protesters.

Mr Mubarak, 83, again lay on a stretcher in the defendants' cage at the trial in which the prosecution has called for him to be hanged for the killing of hundreds of demonstrators in the January-February 2011 revolt.

The lead counsel for victims' families in the Cairo trial submitted official documents, which he said showed that 160 police officers had been armed with automatic weapons and 4,800 live rounds.

The lawyer also showed a report from the Central Security Forces that four units, each made up of 50 policemen, had been supplied with automatic weapons and ammunition.

A speech by the 83-year-old on 28 January, three days after the outbreak of the unrest, amounted to "implicit recognition of the use of force against demonstrators," according to the victims' lawyer.

Mr Mubarak said he had given instructions for police "to protect the demonstrations ... before they turn into riots."

Lawyers for civil plaintiffs have until tomorrow to present their case before the defence takes its turn, after the prosecution last week urged the court to sentence the former leader to hang.

The chief prosecutor told the court that Mr Mubarak must have ordered police to open fire on protesters during the 18-day uprising that ended his three-decade rule on 11 February, leaving more than 850 dead.

A defence lawyer told AFP the prosecution's closing arguments were based, in part, on statements from witnesses they had questioned during their investigation but who had not taken the stand.

Mr Mubarak, detained in a military hospital where he is being treated for a heart condition, is on trial along with seven former security chiefs. 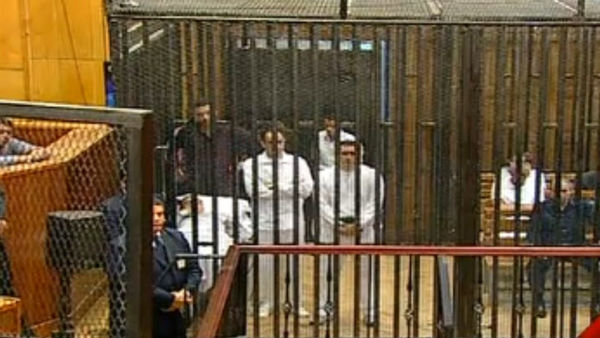